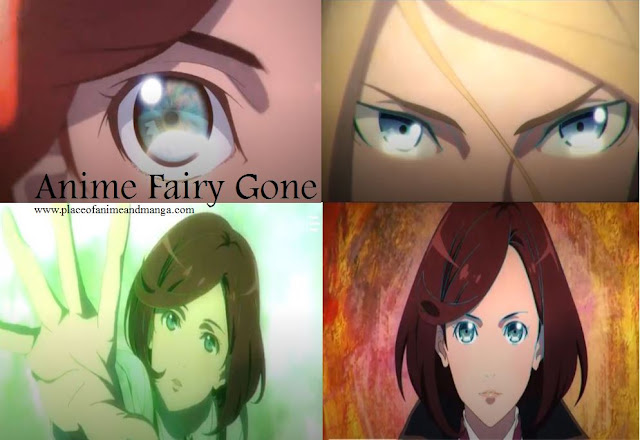 The first episode starts with a map and narration talking about a long war called "The War of Unification", which started many years ago. The narration introduces what this anime centers around, and which is the very title of this Anime: Fairies; the fairy soldiers. This introduction follows with an image of the anatomy of these fairy soldiers. After this short narration, the anime starts at a fairy village named "Suna". This first scene is a war scene. It gives off a feeling of sadness as you hear the people crying, and see the fear and anger on the faces of the fairies living in the village, who have been gathered in one place at gunpoint by military soldiers. There is also a feeling of betrayal as the people are left with nothing as their homes are destroyed and burned by someone they seem to know. Following this, conflict and chaos ensues. 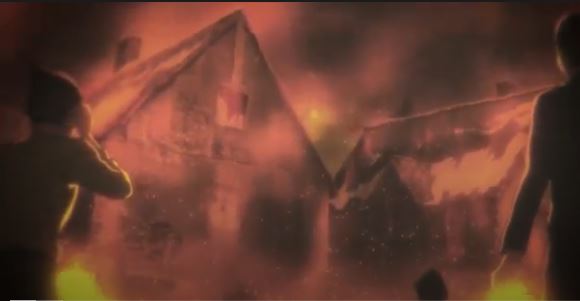 The anime then shifts to focus on two young fairy girl children, one of whom is called "Marlya". Though the relationship between these two girls, as well as the name of the other girl, is still unknown, you can clearly see a deep bond and loyalty between them. Even as these girls are running for their lives in the forest while everything burns around them, they still won't leave the other behind; they supported and strengthened one another.

The anime then moves to the town of Ledrad, where the war was lost. Here you see soldiers still fighting other soldiers, and then everything changes as a soldier announces that the king has surrendered to the enemy. With this announcement, you can feel the disappointment from the soldiers as everything they fought for could't come to be. After this, a narration follows explaining how a place called "Eastald" was unified, and how this brought an end to The War of Unification.

We then see scenes of destruction in the town and the homes of the people caused by this war. One soldier named "Wolfran" walked away in disappointment and sadness when the war ended. Wolfran was a fairy soldier, and after the war, these soldiers "no longer had a place to go" (Fairy Gone, 2019, Ep. 1). 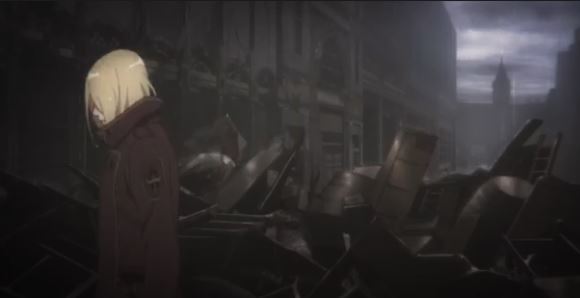 Next is a scene of a young woman walking with a large weapon. The date is U.E. 505, and this episode begins in Fuzan after the opening theme. Fuzan used to be part of the territory of Kal-o. This episode starts with a formal speech being given at an auction, and the young woman carrying the large weapon is exploring the items for sale at the auction house. She is introduced as security working for the auction house. During this time, we get to see many of the items for sale at the auction, which includes fairy items. It is also here that we learn that the woman with the large weapon is Marlya; this is her years later grown up. The large weapon she carries is a hunting rifle.

An adorable creature is introduced here that can see fairies, and which will be sold at the auction. This creature takes a liking to Marlya: 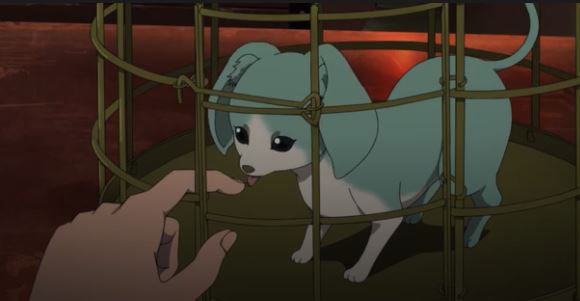 This little creature breaks out of his cage and disappears.

Also for sale at the auction house are beautifully designed fairy primordials:

Soon after seeing these creatures for sale at the auction house, this anime takes a dark turn as screaming is heard from the auction room. A blond-haired woman
with a blade comes in and kills the auctioneers. 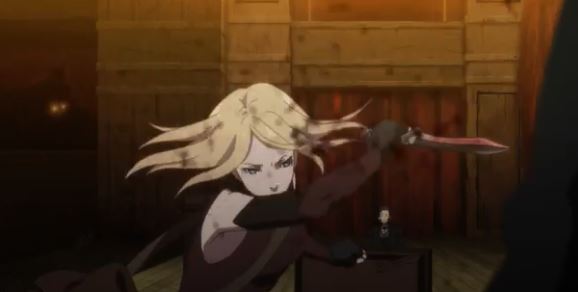 This woman steals the fairy item that was for sale at the auction. The graphics in the death and violence scenes are very dark and graphic. Instead of seeing red blood like in most fight scenes in anime, we see black blood.

The woman killing the auctioneers is a fairy, and she releases a monster/her fairy from her chest that fights the security personnel while she tries to escape with the fairy item she stole.

Chaos ensues as the people at the auction house run for their lives in fear of the monster and the fairy woman. The graphic design of the fairy monster she releases is different from the rest of the graphics in this anime. It is darker in color, but also more HD in appearance, compared to the rest of the anime. 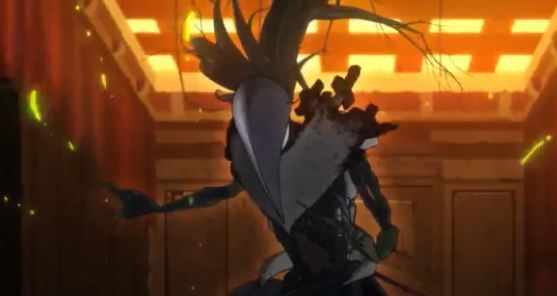 While the fairy woman and Free, the head of security at the auction house, are fighting each other, Marlya prepares to shoot, but stops suddenly when she recognizes the woman fighting Free. Marlya identies this woman as "Veronica"; "Ver" for short. Ver is the young girl who escaped with Marlya when they were children when their village was burned down.

Free then uses this distraction to release his own fairy from his chest to fight Ver's fairy. Free's fairy looks like a dark scary gigantic wolf: 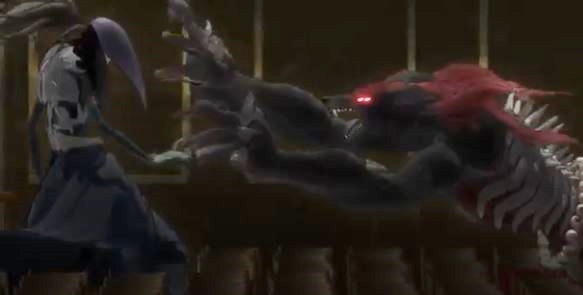 These two continue fighting, despite that Marlya wants the fighting to stop. Ver then tries to run away and Marlya and Free chase after her. Ver tells Marlya that the person she knew as a child is long gone. With this, Ver continues to kill the other security personnel in the auction house as she tries to leave it.

During all this chaos, a fairy primordial gets released as gun shots go off and breaks the jar that it was kept in. Marlya tries to protect the fairy primordial from the gun shots, but as she gets close to it, it enters her body.

When it does this, she remembers when she was with Ver and when her village was burned down. In this memory, Ver swears to get revenge for what happened to her village and leaves Marlya in the forest, which causes Marlya a lot of emotional pain. Marlya is then awakened by the small fox-like creature that broke out of its cage earlier. When Marlya wakes up, she is alone, so she goes to find Ver, who is now fighting outside with Free.

Marlya comes upon them fighting and stops the fight by shooting near Free's feet. Marlya then asks Ver to join her; she tells Ver that she joined the Mafia just to find her. Marlya then openly expresses how much she cares for Ver, and how they are the only survivors left from their village. Ver is distant though and still insists that she is not the Veronica that Marlya remembers.

Free and Ver start fighting once again, and Marlya gets so upset by this, that it causes her fairy to come out of her chest and transform her into this: 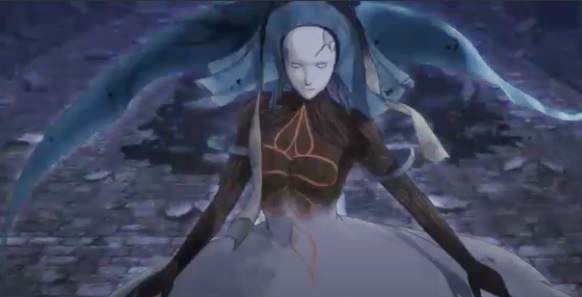 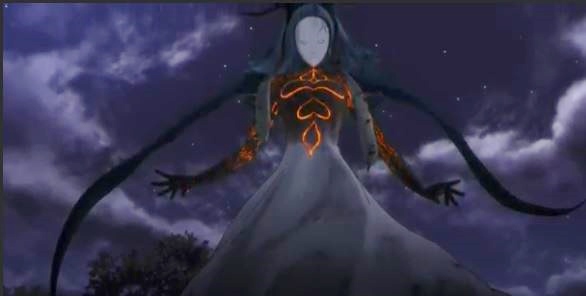 Marlya's fairy then stops Ver and Free's fairies from fighting by burning them, which causes them to disappear. 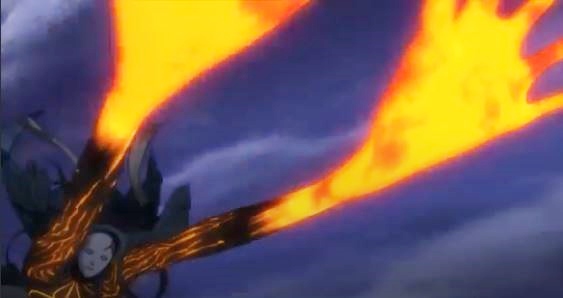 Marlya's fairy then returns to her chest, and Ver uses this distraction to disappear. It is at this time that free confesses that he is not who he said he was. He is really a government worker who works to regulate illegal fairies. Free also tells Marlya that it is illegal for her to be able to use a fairy, but instead of arresting her, he gives her the option of working with him and the government. Marlya accepts because she wants to meet Ver again. So with this, Marlya and Free become partners. 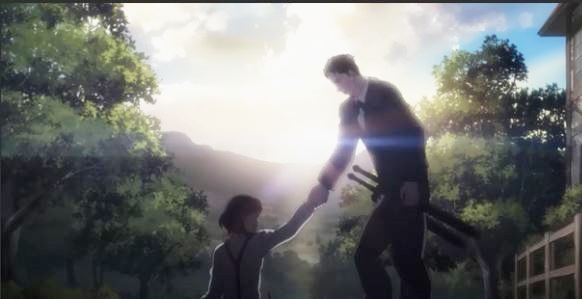 This episode ends with Ver giving the stolen fairy item to a man, who she seems to be working for. This man tells her that it is a fake item. Ver accepts this and walks out of the room. Once out of the room, Ver seems to show her true feelings for the first time. You can see that she truly misses and cares for Marlya and that she was shaken after seeing her so unexpectedly. It is here that the anime ends. The rest of the series kicks off and centers around Marlya and Free's adventures with fairies, and their work for the government.

Anime Review 映画レビュー
Is It Worth Watching?

This anime is excellent. There is a deep storyline and very intimate relationships between the characters. The graphics are very good and advanced. When the fairies are released, it reminds me a lot of Final Fantasy 8, just with darker colors and graphics, rather than lots of light bright colors. The Final Fantasy Vibe is something I love, but this anime is dark enough that it also reminds me of Blood+, which is another favorite anime of mine. Between the supernatural elements, the beautifully smooth animation, the depth of the storyline, and the intimacy between the characters, I definitely do feel that this is an anime worth watching 👍. If you are a fan of supernatural, adventure, and war animes, you are sure to like this one.