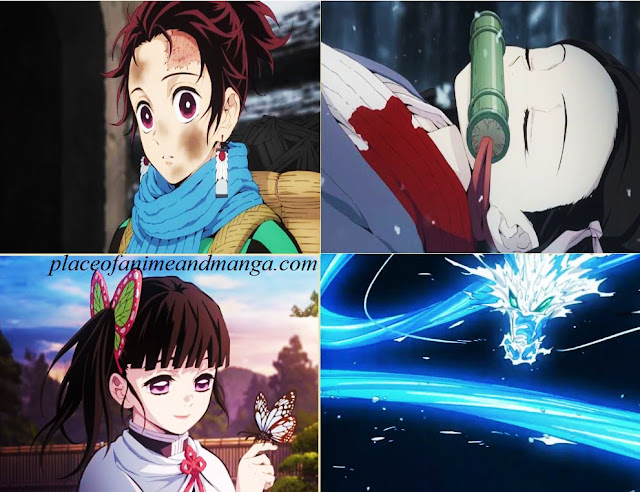 This anime starts off with 2 injured bleeding children (a brother and sister) trekking through the woods. 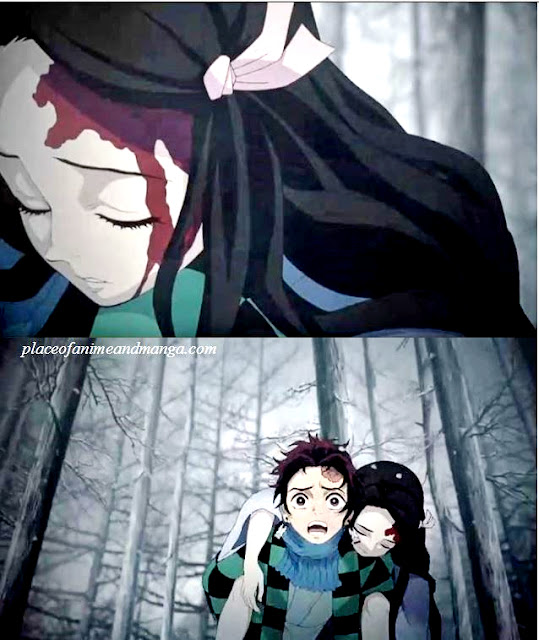 The graphics and design are excellent. The children look very detailed, real and life-like. The snow ☃, forest🌴, their shoes 👟, and even the girl are very HD, ; it does not look too HD and awkward though. It is the perfect amount of high definition.


The music 🎶 that plays is very traditional but sad Japanese 🎎 music.

The boy, Tanjiro, looks very pretty for a boy; he has a feminine beauty and his features and the earrings he wears all add to his feminine appeal.

Tanjiro is unique though for an anime character because he is scarred. It looks like he has a large burn scar on his face on the upper left-hand side near his hairline. Despite the scar on his face though, Tanjiro has a very beautiful face with large round brownish red eyes to match his hair color. I really love the way Tanjiro looks; it is very appealing and attractive. 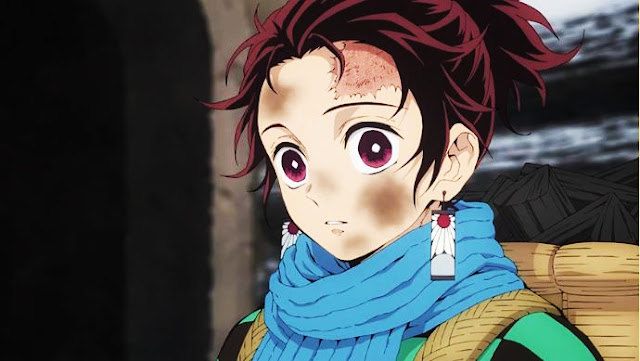 The anime starts out showing Tanjiro at his wooden home in the forest in winter time with snow all around ☃. Tanjiro is about to go out into town to sell charcoal so that his family (his mother, 2 younger sisters, and 3 younger brothers) will have food for New Year's 🎆.

This family is very dependent on Tanjiro since their father died. Tanjiro looks after them and they follow him everywhere he goes. He has become the man of the house and they all need him.

This scene develops the relationship and personalities of Tanjiro and his family. Then the anime focuses on Tanjiro going into town. The scene showing the townspeople walking in town is very HD; it looks very good though.

After Tanjiro sells all the charcoal in town, he heads back home late at night. It is so late though, that a friend from town insists that he stay at his home for the night because it is too late and demons 👺 are out, so it is too dangerous to go home🌛. Tanjiro agrees, and his friend tells him about demons 👹. 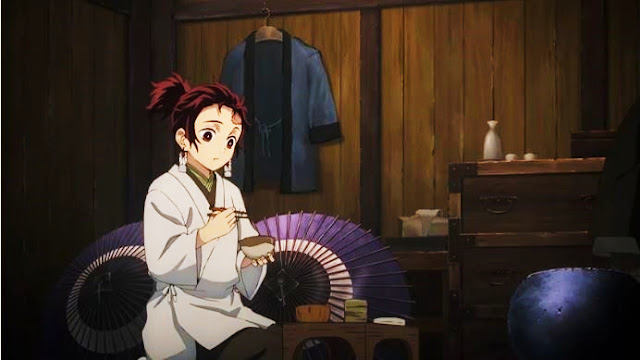 After eating, Tanjiro gets in bed and he remembers his grandmother 👵 who died. His grandmother told him the same things about demons. 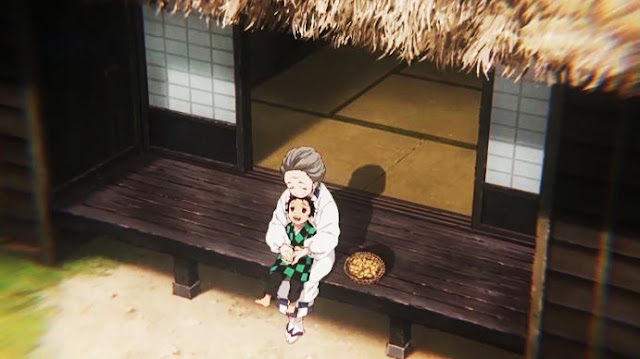 In the morning, Tanjiro gets up and heads up the mountain 🌄 the rest of the way to get home. On the way, we get to see the beauty of the mountains. Again I am reminded how visually beautiful this anime is. The scene of the mountain looks just like a painting; it is lovely. I love the designs in this anime very much. 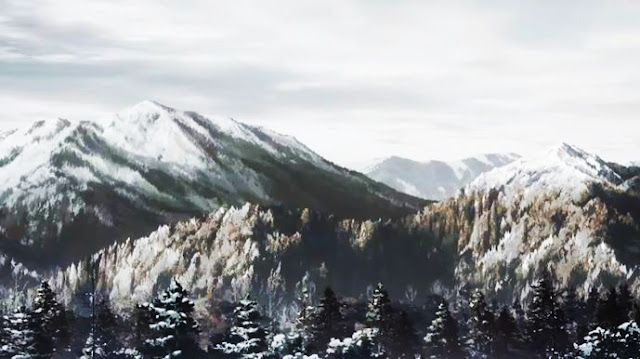 During this time, we learn that Tanjiro has an excellent sense of smell. He can recognize a variety of smells instantly, from the smell of animals 🐎 to blood.

While walking, Tanjiro smells blood near his home, so he starts to run up the mountain. This is when this anime turns dark. The bloody bodies of his family are all around their home. If Tanjiro had not stayed with his friend that night, he would have died with them. 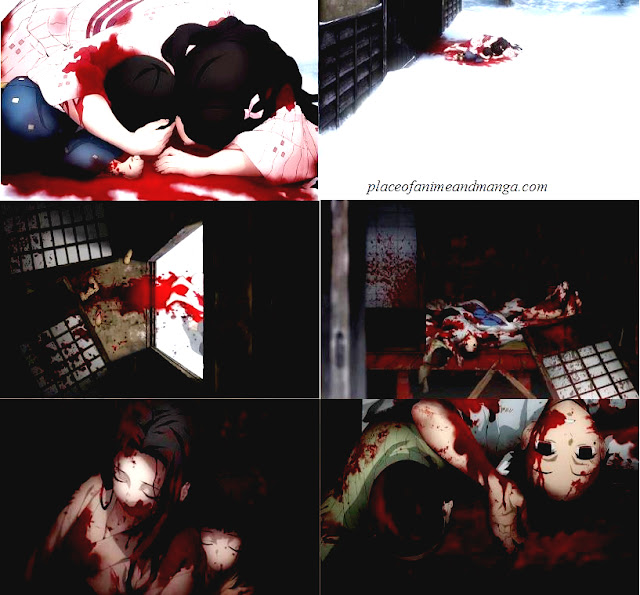 Out of all of his family members, only his younger sister, Nezuko's body, was still warm. So Tanjiro runs down the mountain carrying her on his back. He plans to take her to a doctor. This is this scene that was shown in the opening of this anime.

Things get even darker from here. His sister Nezuko starts to move, but she is acting possessed and very violent. She attacks her brother and causes him to fall off the cliff, but fortunately, it is winter time and the snow cushioned his fall.  It is clear now that Nezuko is not exactly the same person that she was before the attack; she has even grown grown fangs. 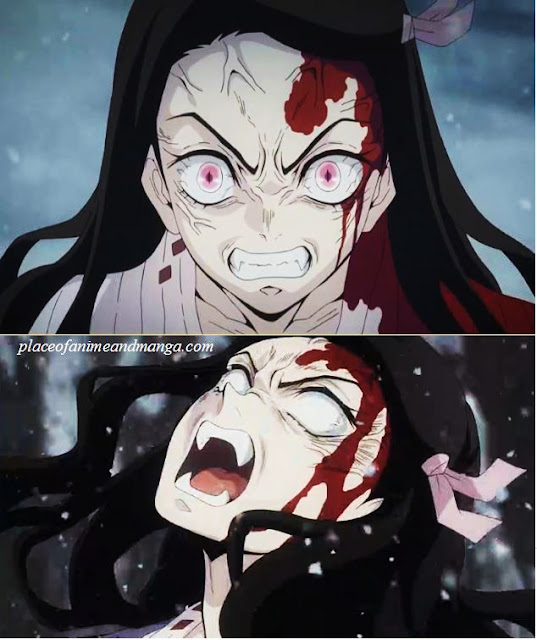 Nezuko no longer seems human; she has become a violent blood-thirsty monster/a demon. Tanjiro defends himself and fights off her attacks as best he can without hurting her, but it gets difficult because Nezuko grows in size/gets larger, and she becomes stronger. 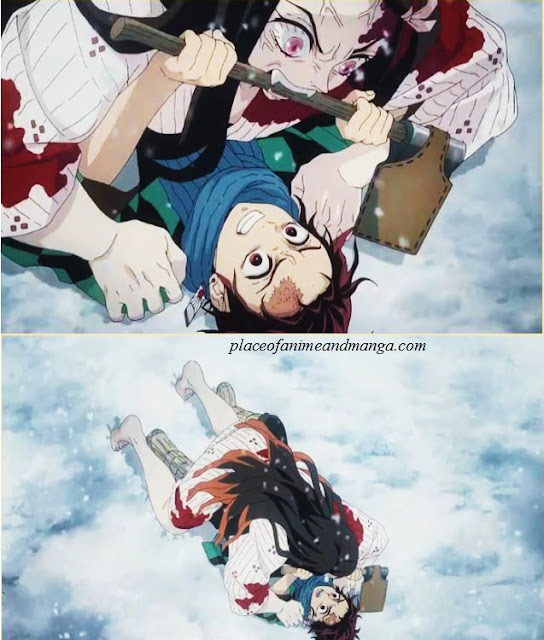 Tanjiro starts to feel such guilt about his family. While he slept comfortably, they were slaughtered, so he tries to make amends by helping his sister Nezuko. He tells her to fight and to not become a demon. He encourages her to hang on and to not give up. His words seem to reach Nezuko because she starts to look more like herself and she starts to cry 😢. 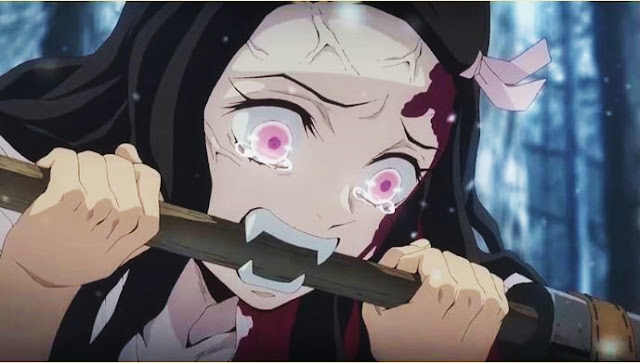 A man suddenly appears and attacks Nezuko, but Tanjiro protects her. This man is a demon slayer, and he attacks Tanjiro again, and this time, he successfully takes Nezuko from him. The demon hunter appears very HD at times, but he never looks awkward; it is the perfect amount of HD.

The design of the demon hunter reminds me a lot of Kingdom Hearts; it is a simpler design but it is still very effective at portraying the personality of the demon slayer. 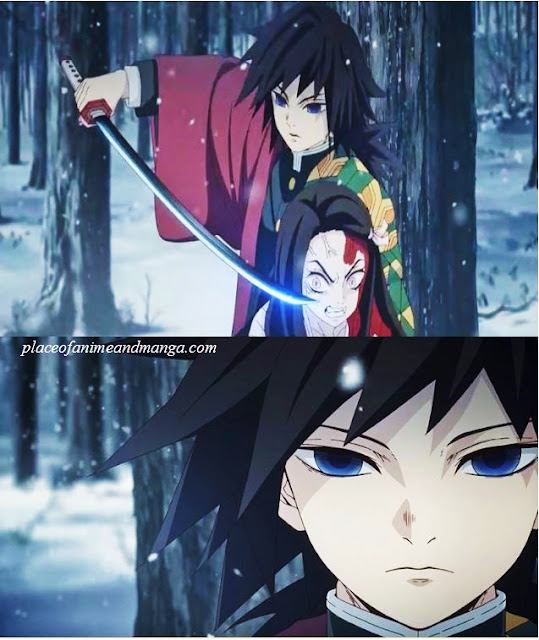 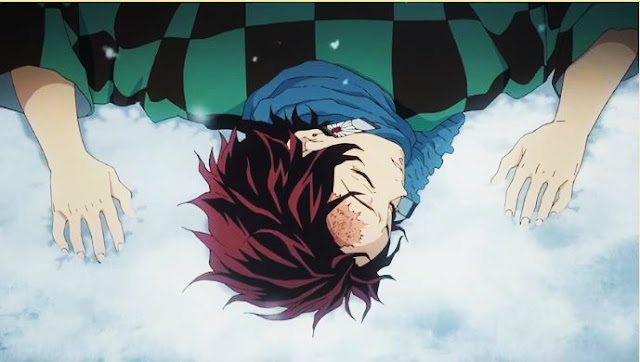 Seeing Tanjiro hurt, changes something in Nezuko, and so she attacks the demon slayer in order to protect her brother. 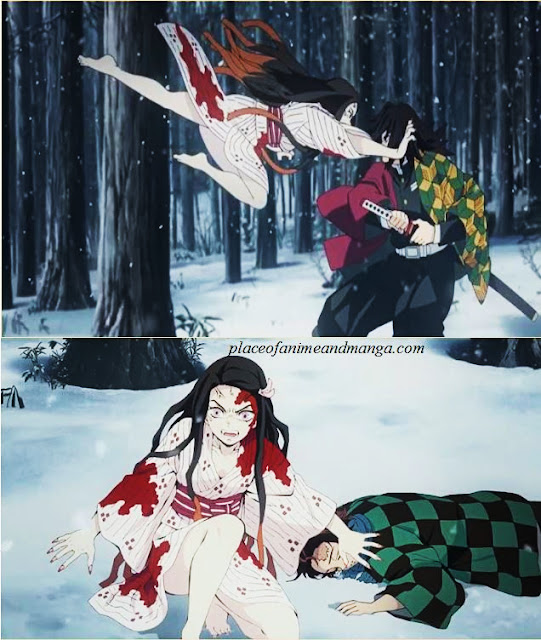 Demons never protect others, and they even eat their own family, so seeing Nezuko protect her brother, the demon slayer decided not to kill her. Instead, he knocked her unconscious.

During this time, while Tanjiro is also unconscious, he is visited by his dead family. His mother apologizes for leaving him behind, and asks him to look after his sister Nezuko. This dream shocks Tanjiro awake, and he is relieved to find his sister lying next to him. 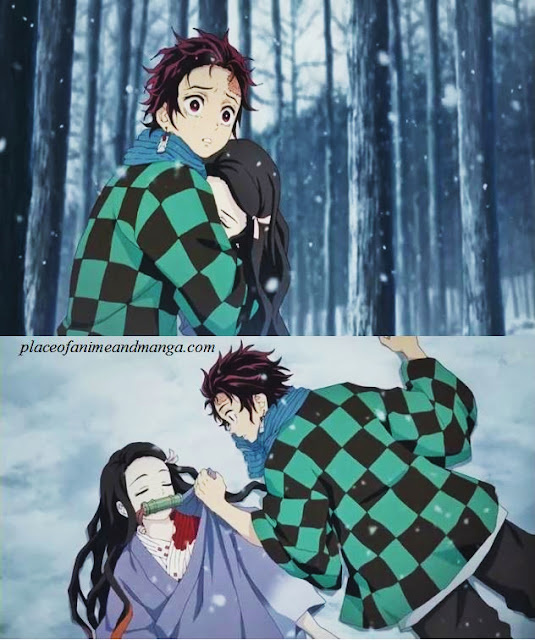 When the demon slayer realizes that Tanjiro is awake, he tells him where to go to get help for his sister. Tanjiro then heads back home, buries his family, and has a short funeral for them. Then Tanjiro and his sister go on a journey to find the man that the demon slayer said would help them. 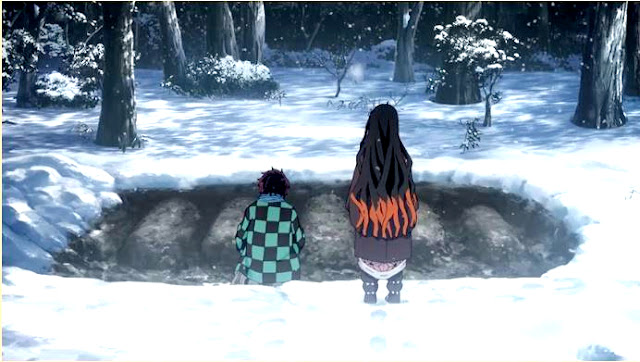 The storyline/plot are great, and it fits well with a historical demon anime. The characterization is nice also, but I would have liked to know more about their father. After all, their family is so large, so it is weird not to hear more about him. It felt like information about him was missing, but this anime does move quite fast once the action sets in, so there really was no time to really talk much about him in this first episode. Perhaps we will learn more about him as the series progresses, but I have a feeling he won't be mentioned much since the focus of the series is on the adventures of Tanjiro and his sister 👫. 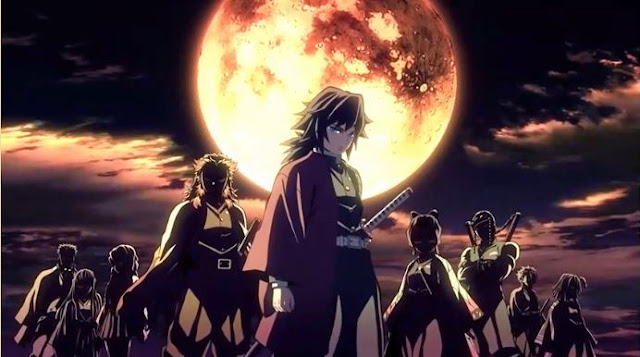 While watching this anime, I felt that after the first 8 minutes into the series, I was on the edge of my seat the entire time. I was not quite sure where the anime was heading until towards the very end, so this anime keeps you guessing, and this makes it more interesting, and it encourages you to keep watching it.

If you like supernatural, demon, historical, action, adventure, and fighting animes, you will definitely like this one. 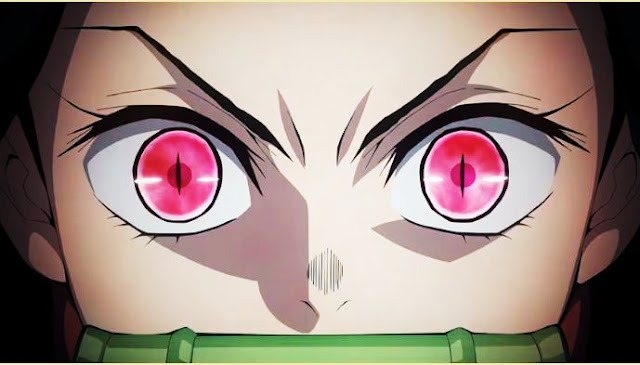 I also love the strong family loyalty and bonds that are shown in this anime; bonds that are so strong, that they even made the sister capable of fighting the demon blood inside of her.

I also love Tanjiro's character and personality, as well as the graphics, design, and HD quality of the anime. So I am eager to watch the next episode of this anime. I can totally see myself watching the entire series. 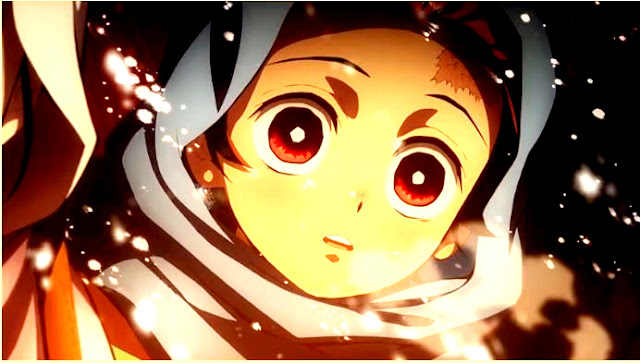 Furthermore, this anime gives me an Inuyasha feel because of the demons, mixed humans with demon blood, the demon slayers, and the battle scenes. I am a huge fan of Inuyasha and I watched every episode and movie in Inuyasha, and perhaps that is partly why I like this anime so much. The graphics are of course very different from Inuyasha; more advanced and HD, and it is a darker more graphic anime in my opinion, but I still do think it is a great anime, and I do recommend watching it. 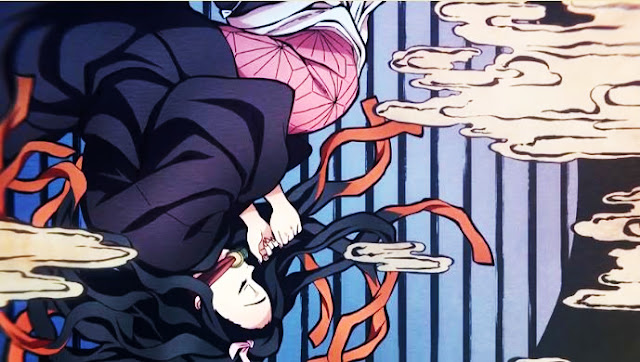