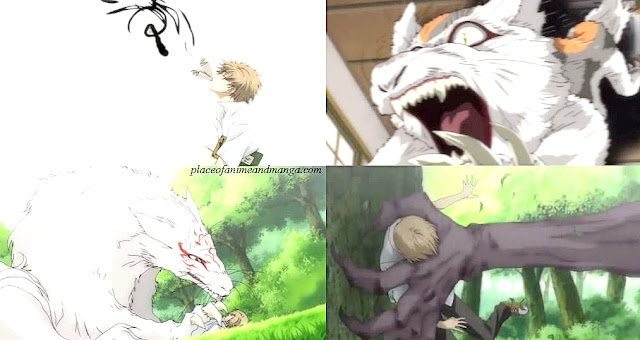 This anime starts out like a horror suspense anime with someone named Natsume Takashi running through the woods from a female one-eyed monster that is looking for a woman. Natsume comes out of the woods and runs into two of his male classmates. Natsume then stops for a moment to catch his breathe, and then he continues running towards a shrine. 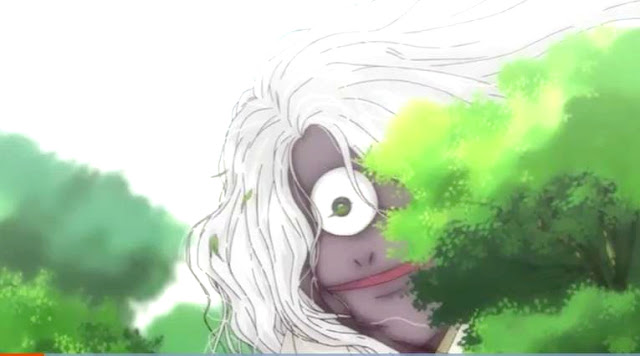 We then learn about Natsume at this time. Ever since Natsume was a child, he could see things others couldn't; things called ayakashi/youkai. His ability to see ayakashi even creeped out his own parents. Since Natsume moved to the area he is in now, it has been harder for him because the ayakashi are not nice and they pick fights with him. Unfortunately, the ayakashi that is chasing him, catches him; thinking that Natsume is someone named Reiko, the ayakashi asks him to return what was taken from him.

The ayakashi was about to pull out Natsume's tongue to prevent him from saying its name, but Natsume hits it in its eye and escapes to the shrine. Natsume trips over a rope at the shrine that was a barrier that sealed a cat ayakashi at the shrine. Breaking this rope leads to Natsume releasing this ayakashi. 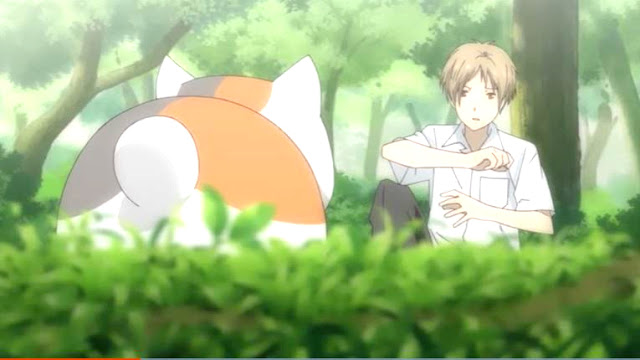 After this ayakashi disappeared, Natsume went home. It is here that we learn that after Natsume's parents died, he lived with various relatives who were not related to him by blood. Currently, Natsume lives on the same land that his grandmother lived on, and he has been living here for about a month. Natsume's grandmother was shunned by her own family for being able to see youkai. This similarity connects Natsume to his grandmother. 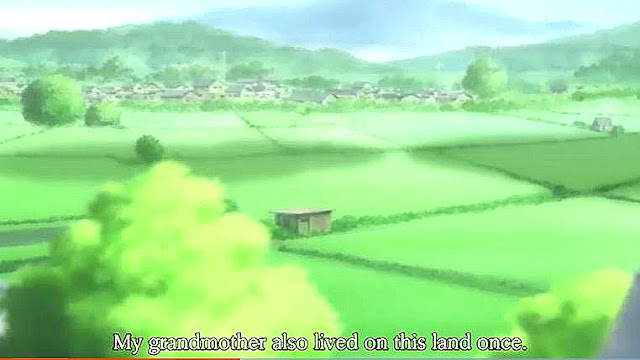 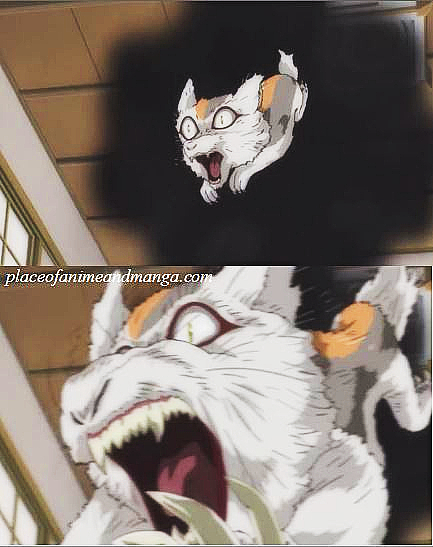 The fortune cat ayakashi that attacked Natsume gets stuck in the sliding paper door/shoji, so Natsume feeds it and releases it. Natsume asks the cat ayakashi to leave after it eats, but it refuses to, and instead, offers to be Natsume's bodyguard for breaking the barrier. This cat ayakashi also doesn't want to leave because Natsume still has the Book of Friends. 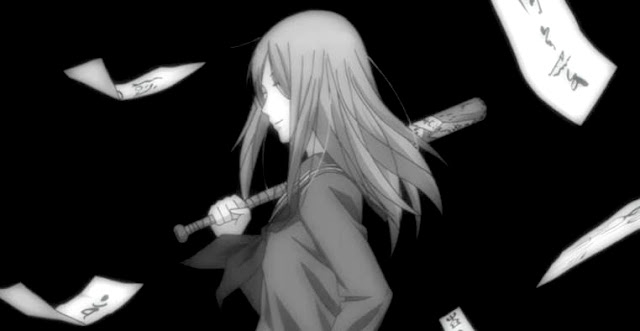 While the cat ayakashi is still there, the two ayakashi that were chasing Natsume earlier arrive at the house and attack Natsume in order to get the Book of Friends. Natsume runs out of the house, and the cat ayakashi attaches to his back and has him hide in a bush. 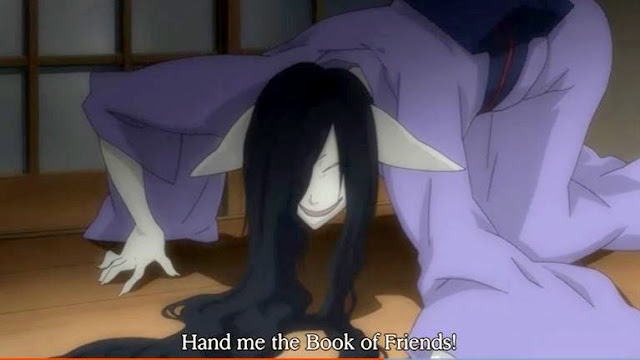 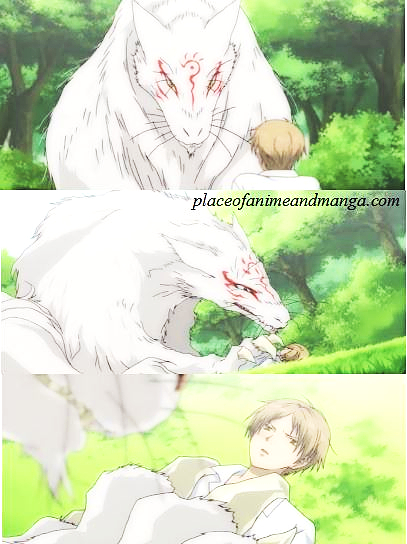 Natsume fights the cat ayakashi back and frees himself. For Natsume, the Book of Friends is more than just any old book; it is his inheritance from his grandmother so he values it greatly. Furthermore, Natsume is Reiko's only remaining blood relative, so he sees the book as his last link to her. 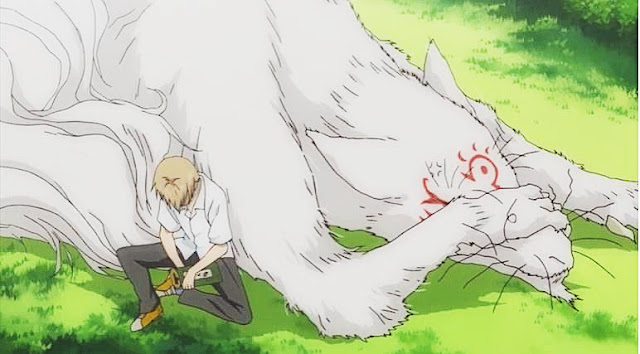 Natsume wants to return the names to the youkai written in the book, but the cat ayakashi tells him not to because there are some evil youkai written in there. Natsume insists that he wants to return them because he believes that this has been left unfinished by Reiko. Thus,  Natsume asks Nyanko Sensei (the fortune cat ayakashi's name) to help him do so by lending him his power. Natsume offers to give Nyanko Sensei the Book of Friends if he dies trying to return the names to the ayakashi. Nyanko Sensei accepts and agrees to help Natsume and protect him. 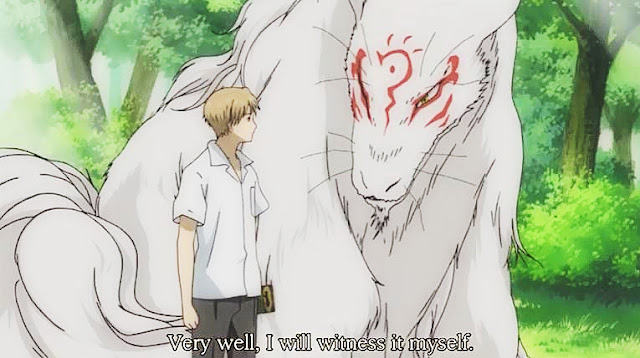 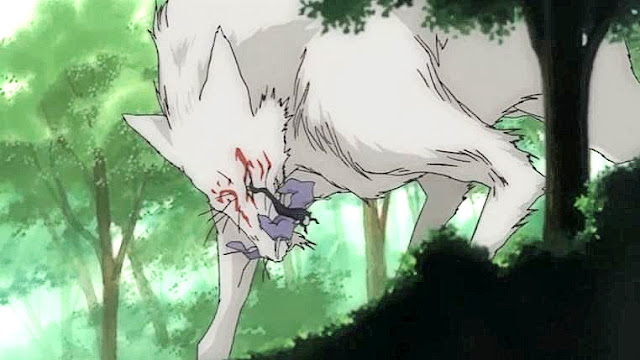 Natsume tears out the name of the ayakashi that is chasing him, and uses his spirit energy to control this one-eyed ayakashi. 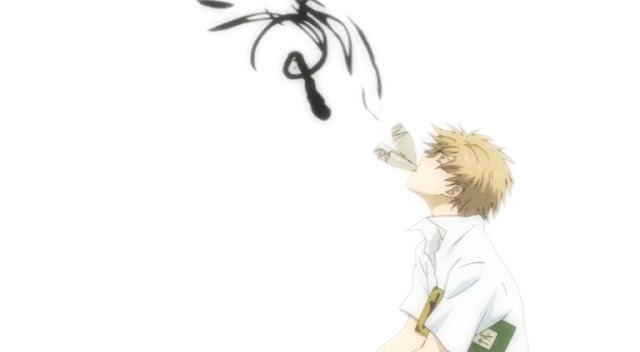 When Natsume does this, he sees how his grandmother Reiko met this ayakashi. Natsume gets to see the relationship between the two of them, and how close they were. Reiko developed a friendship with this one-eyed ayakashi, and it waited for her to return all these years. The pain of Reiko not returning really hurt, and brought great loneliness to this ayakashi. 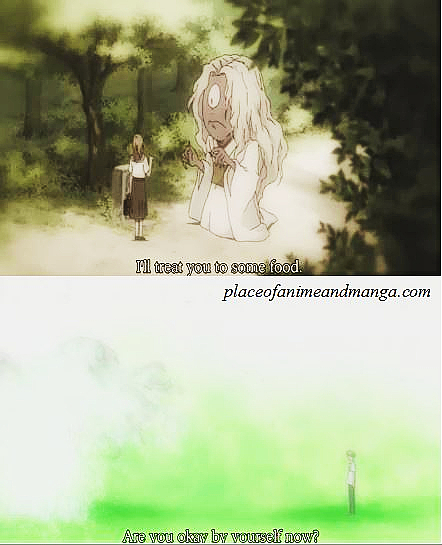 Upon release, this last ayakashi disappears. Seeing the friendship that developed between Reiko and the last ayakashi, makes Natsume realize that he may be able to like the ayakashi. This episode ends with Natsume treating Nyanko Sensei to steamed buns at a restaurant that his grandmother, Reiko, loved. Natsume then starts to bond and develop a friendship with Nyanko Sensei. This bond will likely be a main theme throughout the rest of this anime.

Anime Review 映画レビュー
Is It Worth Watching?

This anime is very popular, which is why it has several series. The supernatural and paranormal elements, the focus on friendship, bonds, difficulties being accepted socially and accepting oneself, and the real family problems that it presents, make this anime very appealing for both teens, children, and adults.

Natsume Yuujinchou reminds me a bit of Inuyasha, but a much more mild version of it. It is a soft anime, but it is still full of action, adventure, spiritualism, magic, and mysticism. If you are a fan of these kinds of animes, then you will likely enjoy this one very much.