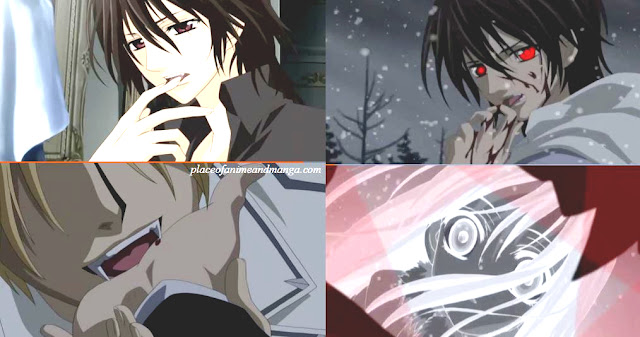 This anime starts with a young female child standing outside while it is snowing, who seems to be lost and who has memory loss. A male vampire comes across her, attacks her, and tries to drink her blood. Another vampire saves her just in time though. 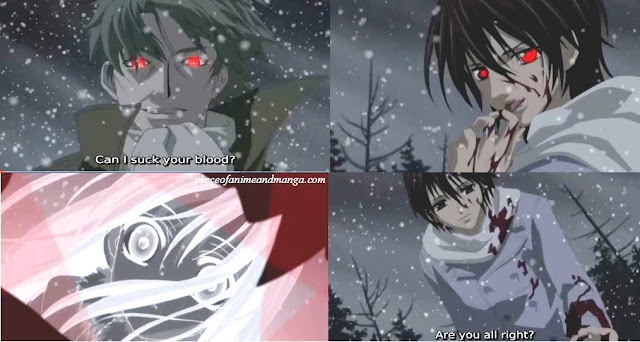 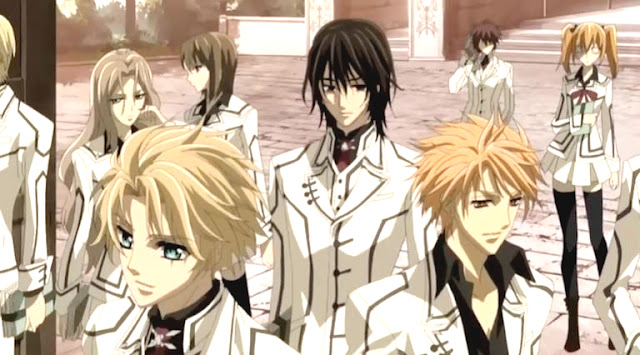 Yuki, the headmaster's daughter, gets knocked over by the Day Class students as they try to get close to the Night Class students, so one of the vampires helps her up, named Kaname. Yuki and Kaname go way back. Yuki was the small child standing in the snow that we saw in the opening of the anime, and Kaname was the male vampire that saved her. 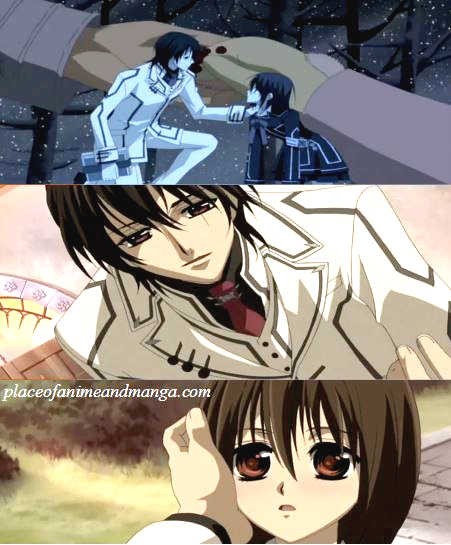 Yuki does not remember anything before she met Kaname, before she was 5 years old. Yuki and Kaname met 10 years ago and Kaname gave her a new beginning; Kaname has been in Yuki's life ever since; Kaname is her savior, so she is very grateful to him, and Kaname is very intimate with her.

Zero, one of Yuki's close friends and classmates, comes along and stops Kaname from touching Yuki affectionately. Zero calls Yuki out for being too obvious about her feelings for Kaname, and that romantic relationships between humans and vampires is not allowed. 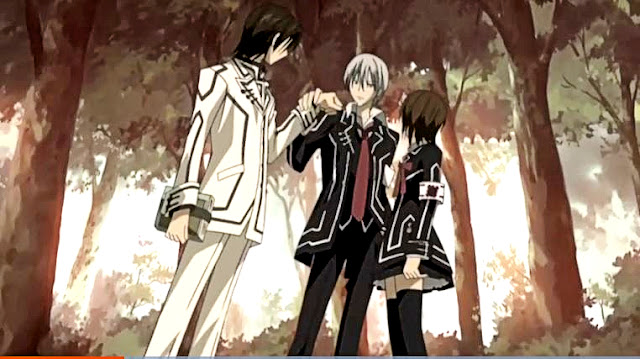 Later on that night, Night Class is having class. The students talk about Yuki, and Kaname admits to being interested in her too much. At the same time, Yuki is talking with her father who considers Zero as his son. Both Yuki and Zero were taken in by the headmaster of the school, Headmaster Cross. Kaname brought Yuki to Headmaster Cross, and he raised her. Headmaster Cross found Zero later, and took him in at that time.

Yuki's father asks them to go on patrol because he started the school in order to unite humans and vampires and to create peaceful relations between the 2 groups, so Yuki and Zero play a pivotal role in the school; this school would not function without them. 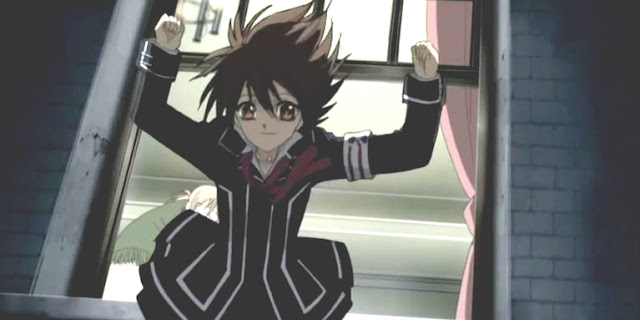 While on patrol, Zero seems to be struggling and taking pills to endure his pain, while Yuki struggles with her growing romantic feelings for Kaname. 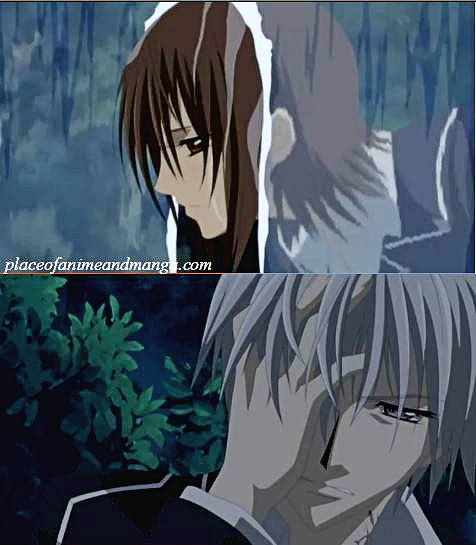 The following day, Yuki and Zero/Kiryu are at school, and they are both exhausted from patrolling, so they fall asleep in class and get detention. When Yuki wakes up, Zero is gone though, so she looks for him after detention to go on patrol, and she finds him asleep in the barn 🐴.

Yuki and Zero have a bit of an argument though because Zero is distant and doesn't share what he feels or what is happening with him. Zero also hates vampires and feels that pacifist ideals are wasted on them, so what Yuki and headmaster Cross are doing are useless to him. Zero voices these thoughts openly, and the only reason Zero goes on patrol and stays in the academy is to find vampires' weaknesses so that he can take them down. 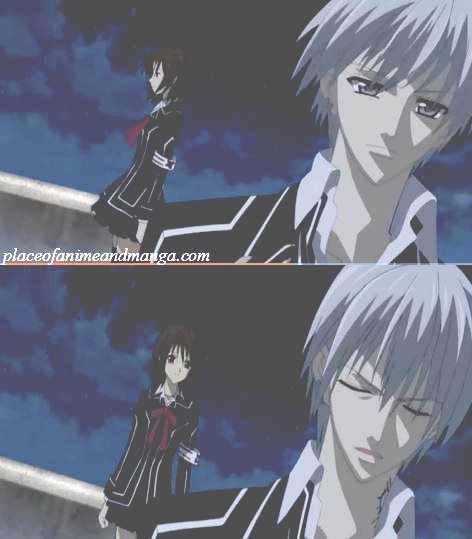 What motivates Yuki and Zero is so different. Zero has a much more negative outlook on things, most likely because his family was killed by vampires. Yuki on the other hand, believes that there are good vampires, and she is even in love with one, Kaname. These differences in their views creates distance between Yuki and Zero, so Zero separates from Yuki to patrol alone by himself.

While on patrol, Yuki sees girls out at night trying to see the Night Class students, so she insists that they return to their dorm because it is dangerous. One of the girls is injured and bleeding though, so two of the vampires from Night Class come to the girls because they smell blood. As a result, Yuki attacks them with her weapon in order to protect the girls. Unfortunately, Yuki also got injured when she jumped down to where the girls were, so one of the vampires starts to draw Yuki's blood and attack her. Seeing the fangs in the Night Class student causes the Day Class girls to faint. 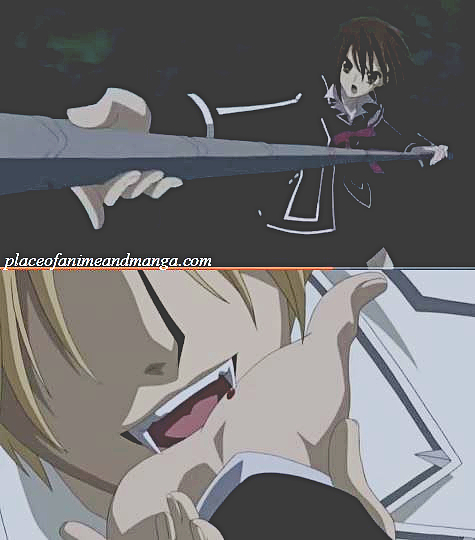 Zero appears quickly to save Yuki and separates her from the vampire attacking her. Then Kaname, the leader of the vampires appears, and the fight between Yuki and the Night Class vampires ends.

While blowdrying her hair, the smell of Yuki's blood becomes too tempting for Zero, so he leaves the bathroom suddenly. When he leaves, his eyes change to a red color, and he drinks his own blood to prevent biting Yuki by  biting down hard on his own tongue. 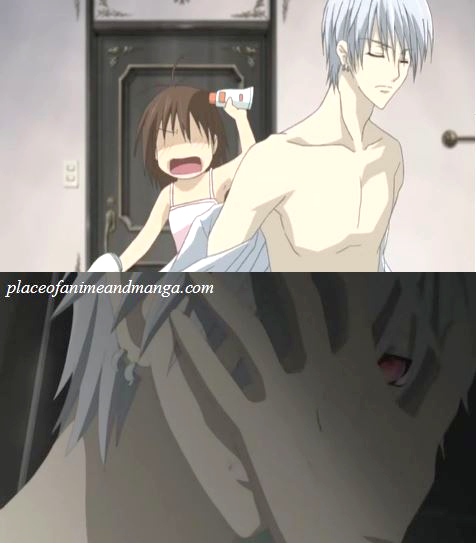 This anime ends back at the Night Class dorm room. After Kaname punishes the vampire who attacked Yuki earlier, we see a scene where Kaname's desires, feelings, and affection for Yuki is very apparent. So, the rest of this anime will follow the experiences and interactions between the Day Class and Night Class students, the relationship triangle between Yuki, Kaname, and Zero, and the interactions that humans and vampires have with each other at this academy. 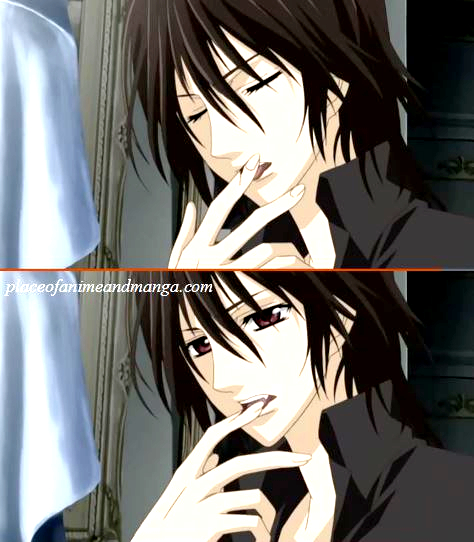 Vampire Knight is an excellent EXCELLENT anime! It has action, adventure, subtle war themes, and lots of romance, sexuality, and intimacy. This anime has historical elements, as well as supernatural, magical, and vampire themes. This anime even adds a school theme to it as well, so you get a little bit of everything in this anime. This is one of those animes that will appeal to just about everyone on some level, both teens and adults.

Do I recommend this anime? ABSOLUTELY! It is an excellent anime from the plot, romance, to the storyline.