Akatsuki No Yona Yona of The Dawn 暁のヨナ; Ep. 1 Review, Synopsis, Summary - Is This Series Worth Watching? 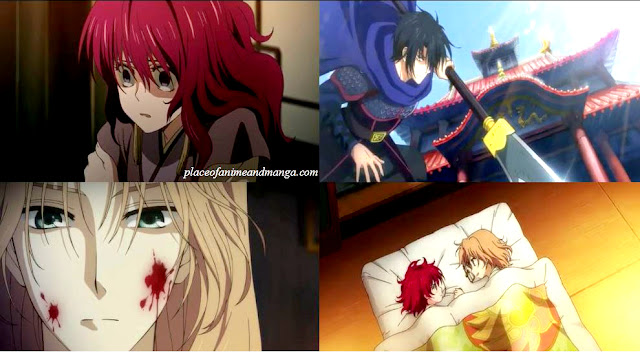 Akatsuki No Yona
Yona of The Dawn Review 暁のヨナ;


This anime starts out showing a girl looking at an army of soldiers pass by with a group of 6 young male fighters.

We learn in this scene who this woman is, where she came from, and why she is watching the soldiers pass by in secret. This anime then takes us back to the past, and we learn here that the young woman is Princess Yona, and they are in the Kingdom of Kouka. Princess Yona used to live in the castle in this kingdom with her father, the king. She had no mother or brother living there with her and her father. Princess Yona's father became king 10 years ago, when the previous king, his father, died. 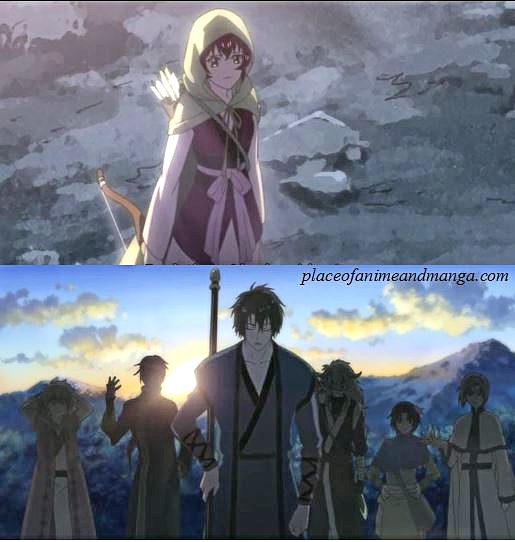 The Kingdom of Kouka is a small nation surrounded by many powerful nations, so there have been many wars, but in the last 10 years, things have been peaceful.

Along with her father, Princess Yona is also very close to her childhood friend, Hak, who is also one of the five generals who protects the palace from the Wind Tribe. 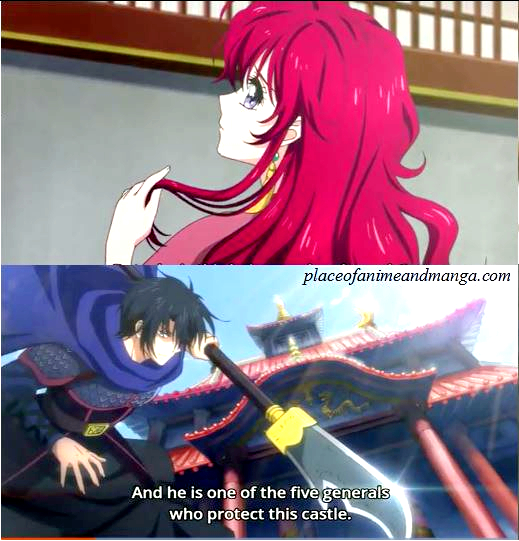 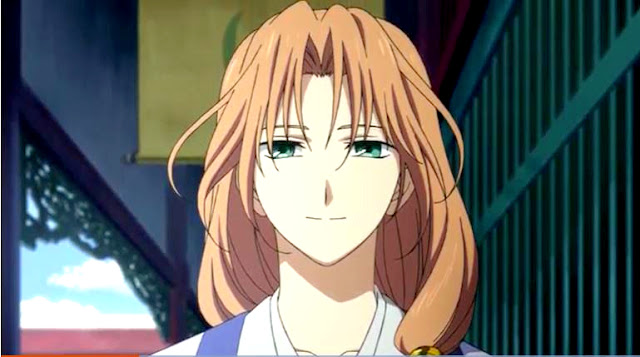 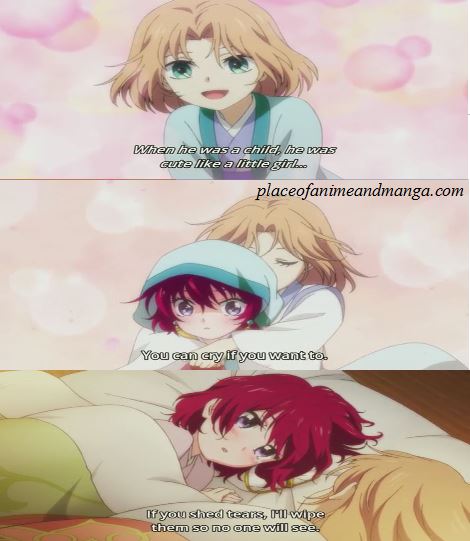 Unfortunately, Princess Yona's father says that it may not be a lie because Hak would be the best marriage partner for her. Princess Yona refuses to accept this though, and she tells her father that she wants Prince Soo Won. Her father tells her that that is impossible because the one who marries her would become the next king, and Soo Won cannot be the king of their kingdom. 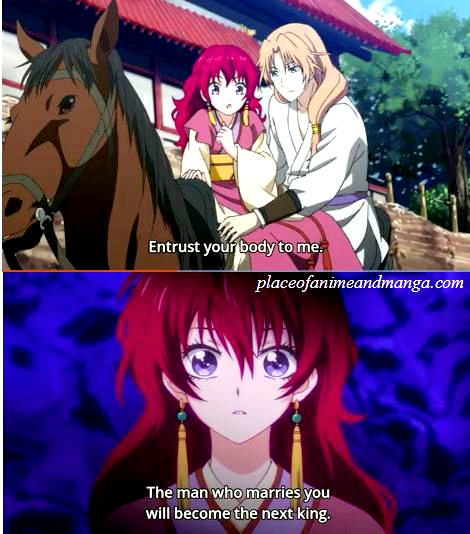 Princess Yona lost her mother to rebels, who kidnapped and killed her, so her father is very cautious about choosing the next king. Princess Yona's father does not want rebels to take over their kingdom and take his thrown. This news is devastating for Princess Yona.

While Princess Yona is crying alone outside after talking with her father, a strange man tries to take her. She runs, and Prince Soo Won catches her and saves her. Having this experience right after hearing about the death of her mother again, causes a lot of trauma for Princess Yona. 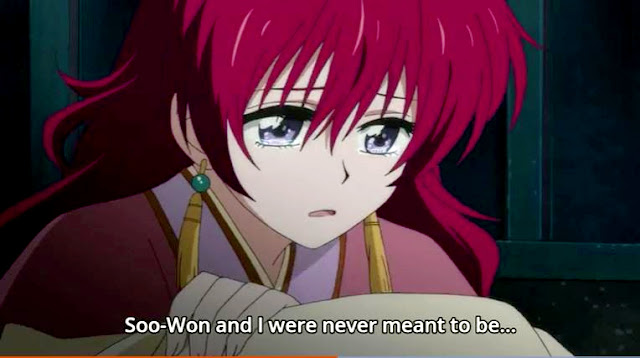 The fear from the experience Princess Yona just had causes her to tell Prince Soo Won that she wants to be with him, but then she remembers what her father told her earlier, so she pushes him away saying that she can't be with him. Prince Soo Won gets upset and misunderstands her, so he walks away from her. In order to stop him from leaving, Princess Yona confesses her love for him, and he ignores her, and acts like she didn't say anything. Prince Soo Won even knocks her hand away and tells her not to touch him. 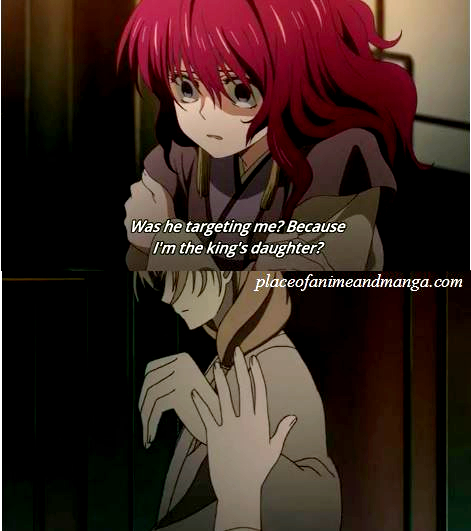 Prince Soo Won believed that he misheard Princess Yona, so he asks her to confirm it. She says that she truly meant what she said, so Prince Soo Won becomes flustered, and he admits that he saw her as a younger sister; he tells her that it won't be good to see her as a woman. Prince Soo Won also admits that knowing her feelings has changed things, and that they can't sleep together holding hands anymore like they used to because he would be too nervous now that he knows about her feelings. 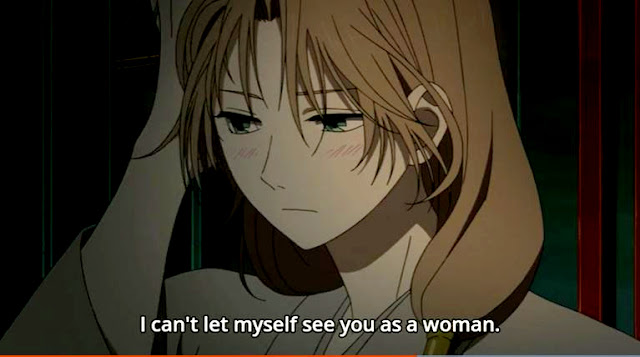 Five days later, we see the princess' birthday celebration. Prince Soo Won came to the celebration, and he gave the princess her birthday gift, which is a hair ornament to match her beautiful red hair color.

Princess Yona really hates her red hair because it is unruly and stands out from others, but Prince Soo Won tells her how beautiful her hair is, and this makes Princess Yona very happy. 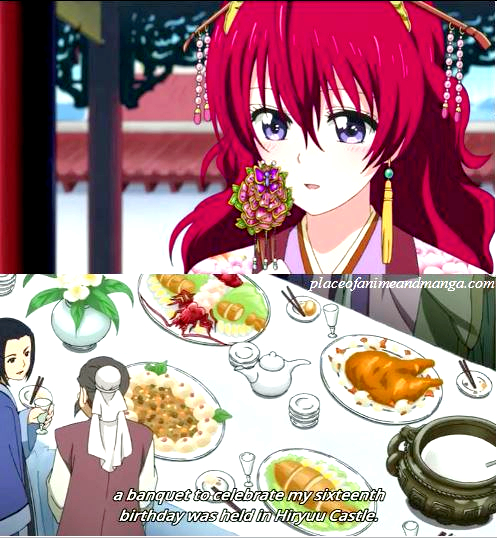 Later that night, the princess goes to talk with her father again about marrying Prince Soo Won, but she finds no guards in the palace, and her father's door is open. Princess Yona walks in and witnesses her father being killed by Prince Soo Won. The princess can't process this, especially since Prince Soo Won acts like nothing happened, so she asks Prince Soo Won to get medical help for her father, but he tells her that her father will never wake up again because he killed him. Prince Soo Won says this as simply and easily as one asks for a glass of water. It is very unnerving. 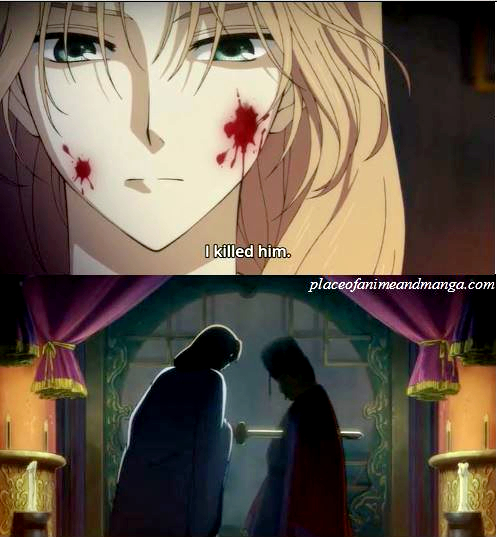 During this time, Hak is patrolling, and the princess is dragged out by a group of soldiers to be killed. Hak appears though right before the killing blow is given. The shock and betrayal from Prince Soo Won is too much for Princess Yona to handle, so even as she is about to be killed, she still calls out Prince Soo Won's name; still believing that he would come to help her, and that what she is seeing isn't real. 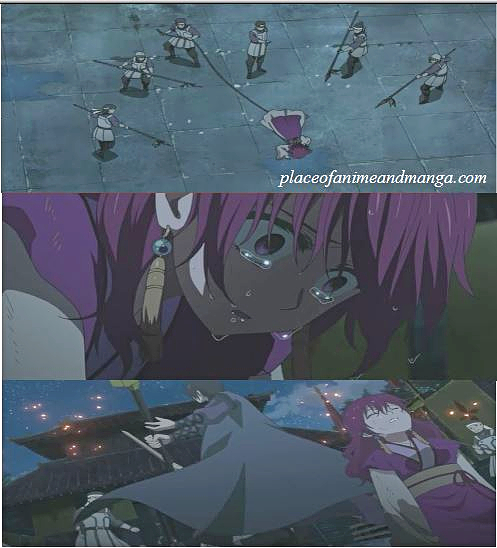 
Anime Review 映画レビュー
Is It Worth Watching? 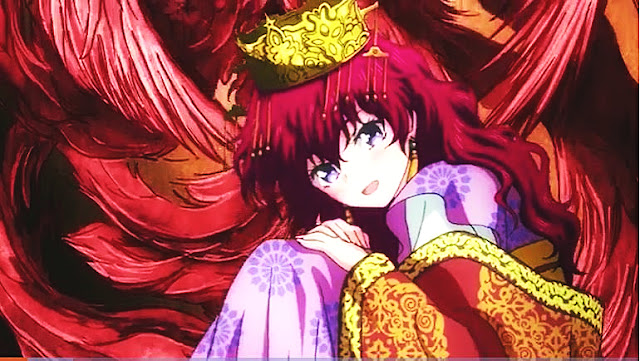 This is a great historical anime that shows the innocence of youth protected by one's parents, as well as their growth, maturity, and relationships with others. This anime is about romance, friendship, loyalty, and betrayal; it has some violence in it, but it is not intense, and the violent scenes are mild, short, and are far and few between.

The very nature of this anime will appeal to teens, historians, and older adults. This is an anime that many people will be able to relate to on some level, and you can really feel for Princess Yona as a person; you develop a love for her because of all that happens to her in this series. 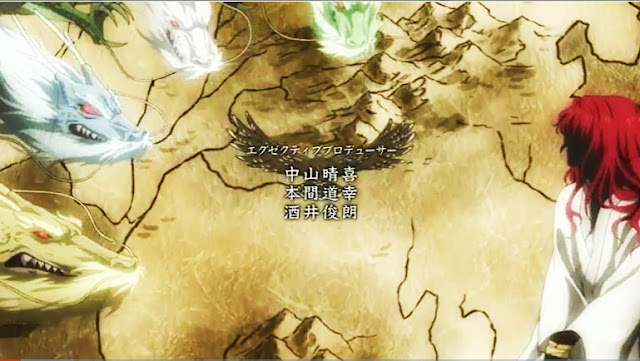 If you are into historical action animes without too much violence and fighting, then you will likely enjoy this anime.