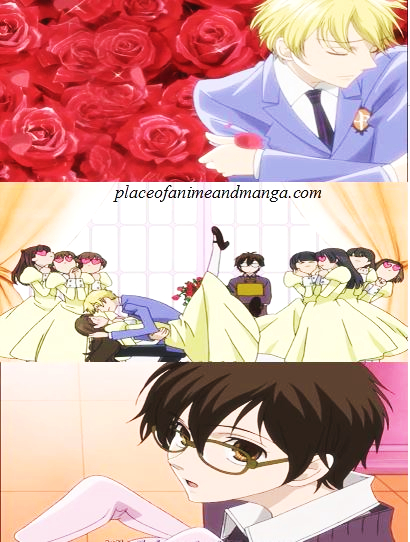 The anime starts off showing a very rich private school where they have a host club in an empty music room with handsome boys that entertain well-off young ladies. 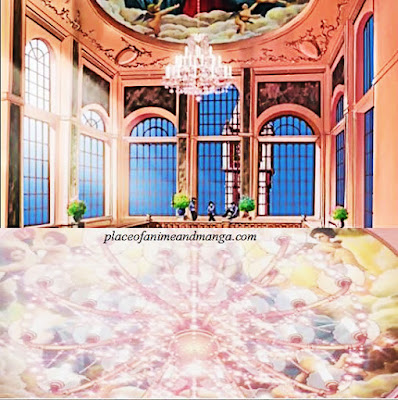 One student, our main character named, Fujioka Haruhi, comes across the host club by accident. The members of the host club know Fujioka because he is a poor student, a commoner who got into this wealthy private school because of his excellent grades on scholarship. This is very rare in this school so everyone has heard the name Fujioka. Since Fujioka came to the host club, the member's assumed that he is gay, so one of the boys in the club got very close and intimate with Fujioka. This made Fujioka uncomfortable, so he backed away quickly, and accidentally bumped into an expensive vase causing it to shatter. 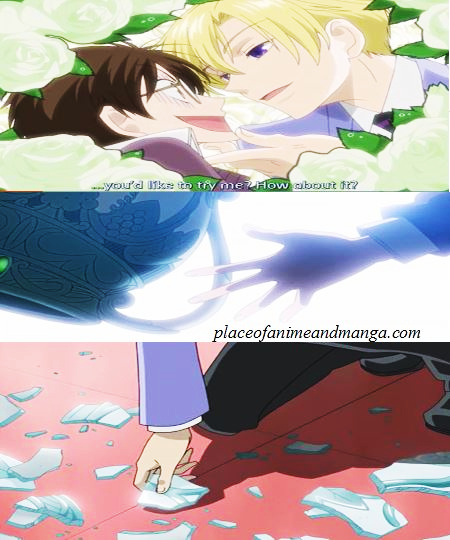 The vase breaks and it is worth 8 million yen, so Fujioka tries to pay it back. The host club says he can be their dog and work to pay off the vase. 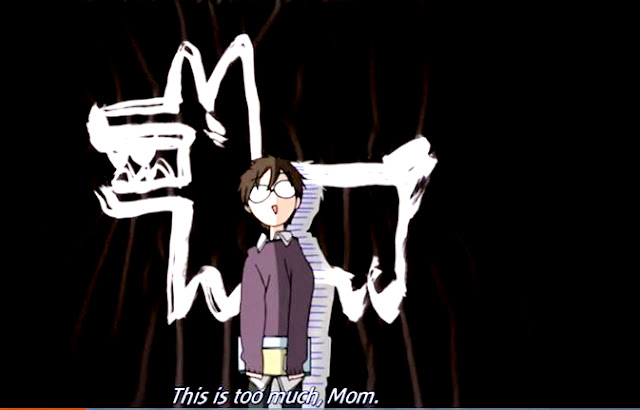 Fujioka gets sent to run errands for them and buy supplies. He also introduces the hosts and all their guests to things that are common among commoners, such as instant coffee, which adds excitement to the host club for its guests. 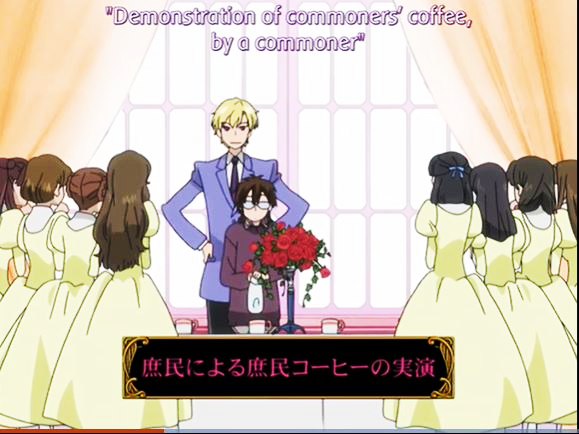 While in the host club, Haruhi (Fujioka) gets to meet and learn about all the hosts and their personalities. He watches them interact with the guests; he sees the guests reactions to the romantic, sweet, intimate moments that they have with the hosts, and he learns about what the host club does, how it works, who the favorite hosts are, and what makes them so popular among the female guests. It is here that we also learn that Tamaki is the number 1 host, the king of the hosts in the club, because he is requested the most among all the hosts. 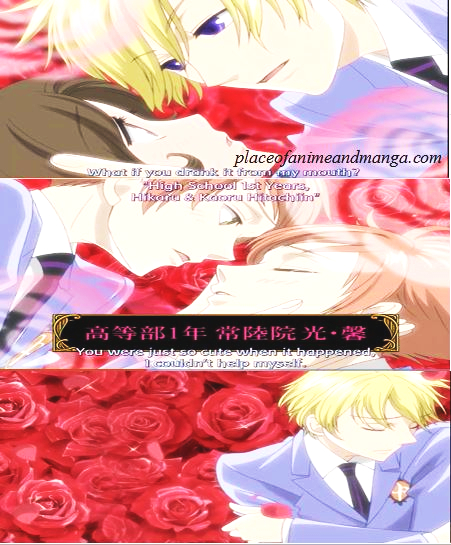 The vice president of the host club, Kyoya Otori, tells Haruhi that because of his debt, he will have to be the errand boy for the host club until he graduates, and that if he ever runs away from his duty, he will be hunted down by Kyoya's family who employs a private police force. After this, Tamaki tells Haruhi to think carefully about his decision to work in the host club. To help Haruhi, Tamaki also gives Haruhi some tips on being a host. It is also here at this time that we learn that Tamaki started the host club so he is the leader of the club. 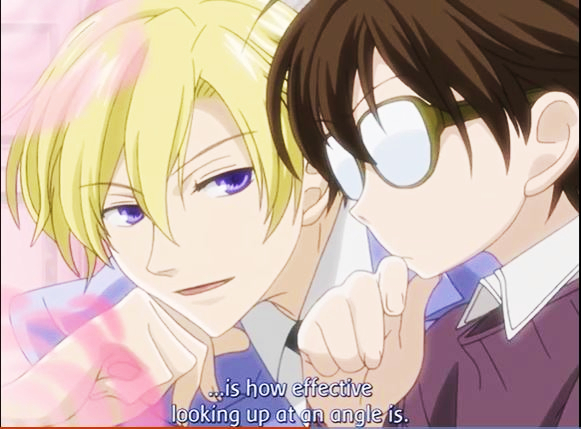 The hosts also talk about making Haruhi look more like a host, so they take off Haruhi's glasses. The hosts are so impressed by Haruhi's looks, that they give him a full makeover. After the makeover, Haruhi looks adorable, almost like a girl, so Tamaki decides not to make Haruhi an errand boy anymore; he makes Haruhi an official host in the club. Tamaki also decides to train Haruhi personally, and he even offers to forgive Haruhi and clear his debt for the broken vase if he can get 100 customers to request him as their host at the club. 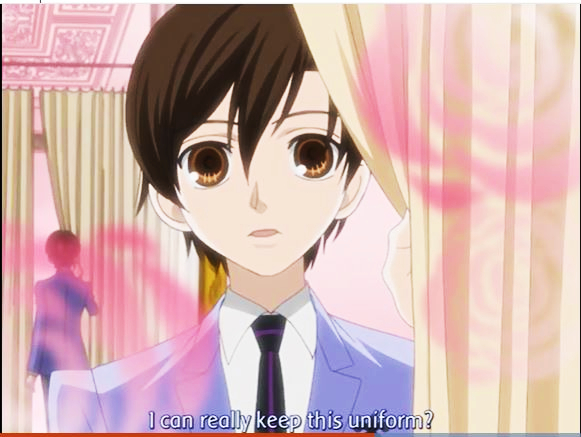 As soon as Haruhi starts working as a host, he becomes very popular, and he is a natural at being a host. Even Tamaki is impressed by Haruhi's natural host abilities. 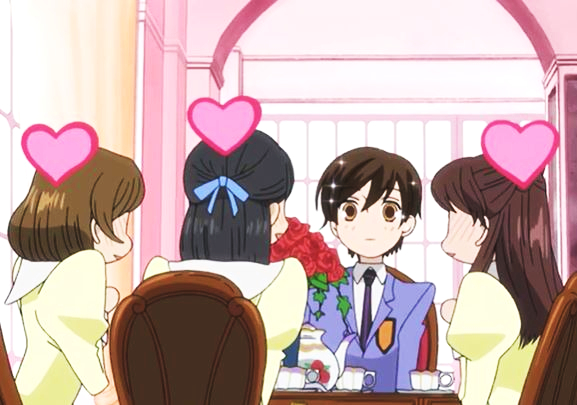 Haruhi's popularity with the other hosts, especially with Tamaki, upsets one of the guest's who has favored Tamaki for a long time. As a result, she decides to bully Haruhi out of jealousy for the attention he is getting from Tamaki and the attention that is being taken away from herself. 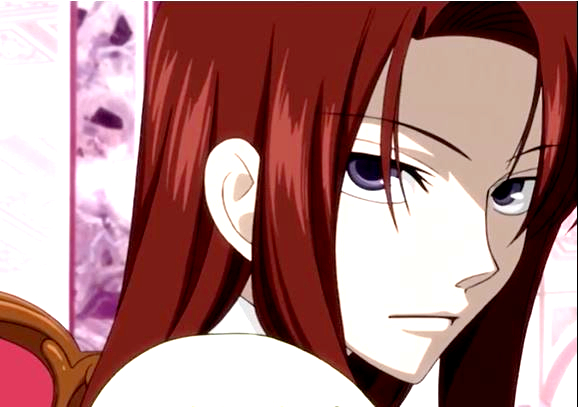 To hurt Haruhi, this jealous guest takes haruhi's book bag and puts it in the water. While Haruhi tries to get her bag and possessions out of the water, Tamaki sees him and helps him. It is here that we see haruhi begin to develop a little crush on Tamaki. 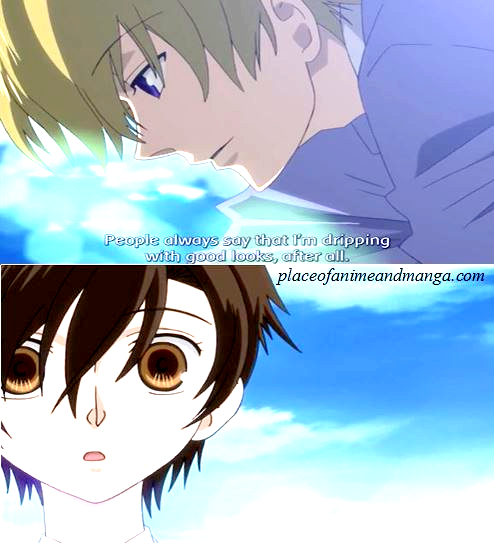 Haruhi finds all of her possessions and gets them out of the water, but she can't find her wallet. Tamaki is able to find it though. The whole time this is happening, the bully is watching, and sees that the bullying backfired because Haruhi and Tamaki actually became closer. Tamaki is not a fool though; he knows that this was not an accident as Haruhi claims, but in fact, it is the result of bullying. This angers the bully more, and so she requests Haruhi at the host club, and threatens him and tries to put him in his place. 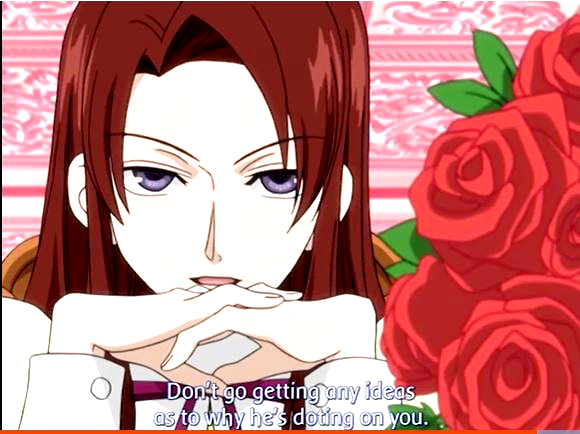 When Haruhi calls Tamaki out for being jealous, she gets upset, knocks over the table, and says that Haruhi attacked her. Tamaki and all the hosts realize that Haruhi was bullied by this guest, and so Tamaki protects and defends Haruhi and calls the guest out on her disgraceful behavior. Tamaki even tells the guest that she is not fit to be one of their guests, so she runs out upset and crying. 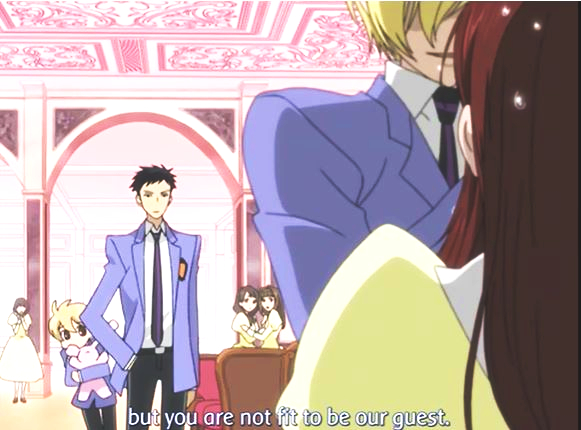 Despite that the issue with the bullying was not Haruhi's fault, the trouble it caused did increase Haruhi's quota as a host by $1000 yen as a punishment. When this issue is fully settled, Haruhi is given clothes to change into. At this time, Tamaki also discovers that Haruhi is a girl by accident when he comes into the dressing room while Haruhi is still changing. When this is discovered, 2 of the other hosts admit to knowing that Haruhi was a girl much earlier than Tamaki did. 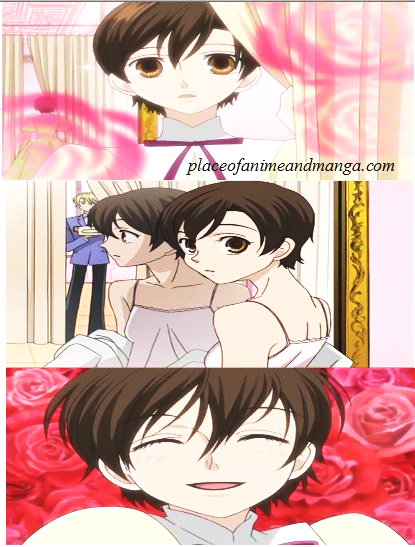 Seeing Haruhi as a girl is the beginning of a big crush that Tamaki starts to develop on Haruhi. This scene is where this first episode ends, so we know that throughout the series, the relationship between Tamaki and Haruhi will be one of the main focuses of this anime. 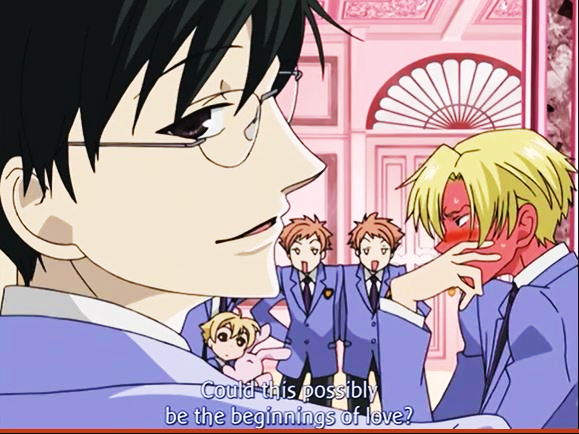 
Is It Worth Watching?

This is a shoujo school everyday anime that focuses on the growth, changes, and romance between the characters in a way that appeals greatly to women and young girls. This anime does have strong sexual and romantic themes though, even between men, so some parents may not be okay with this anime if they are very traditional, strict, and old-fashioned.

This is a funny comedic anime without intense violence or extreme negative themes. This anime will appeal to those who love everyday romance animes, shoujo, school-themed animes, and animes that pair a rich man with a poor woman.

I think this will be a fun anime for teens and young adults, and those who like some sexual comedy in their animes.