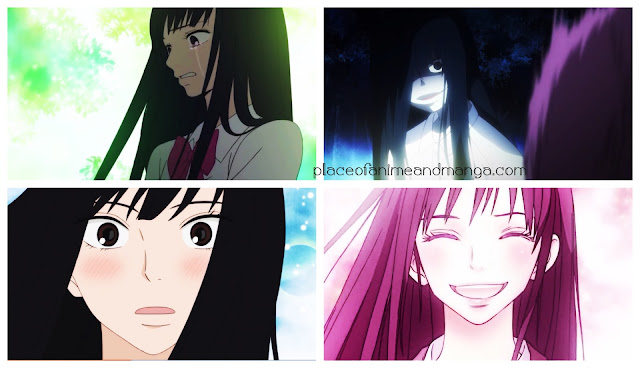 Kimi Ni Todoke
From Me To You 君に届け

This anime starts out like the telling of a ghost story or a haunting with students talking about the main character named Sawako, who they compare to the horror movie character Sadako, because of her appearance, long hair, and scary demeanor. For this reason, everyone is afraid of Sawako; they think that she can see ghosts 👻, or that ghosts follow her around. None of this is true though, and so Sawako feels that she cannot live up to everyone's expectations for her. This makes her feel that she is disappointing them. Sawako wants to be liked and so she tries to be friendly with everyone, but she is misunderstood. 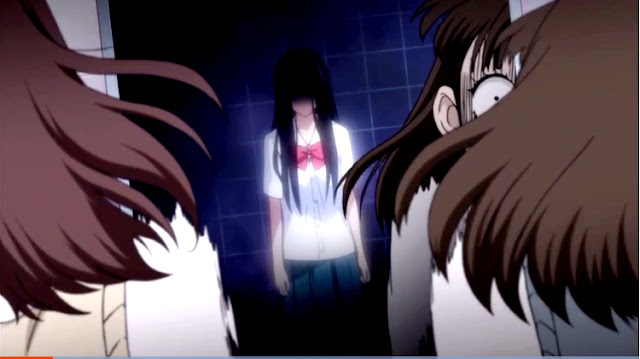 The person Sawako likes is a guy in her class named Kazehaya, who everyone likes and who is always surrounded by many people. Kazehaya is the opposite of Sawako. He is very kind to everyone, and he even treats Sawako the same as everyone else. Ever since the first time Sawako met Kazehaya and he treated her like a normal person, she has aspired to be like him and has liked him since. 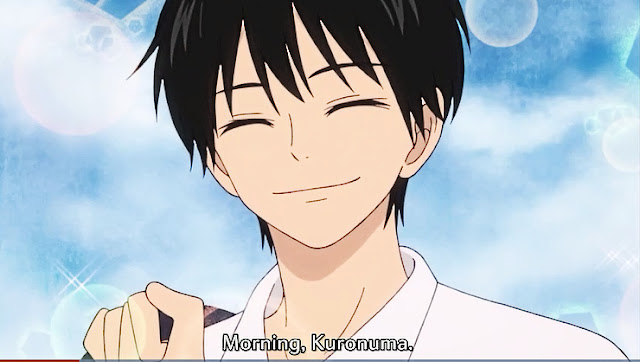 School has now started and the students are preparing for an event 🎊 on the day before the closing ceremony. A volunteer is picked to help prepare for summer classes, which is something that no one wants to volunteer for, so Sawako volunteers. Kazehaya stands up for Sawako though saying that it is not fair for her to always get the jobs that no one wants, so Kazehaya agrees to take her place. Sawako is so touched and happy that he noticed how hard she tries to be accepted by everyone, that she insists to do the job, since she  knows that Kazehaya is being kind and doesn't really want to do it. Kazehaya noticing Sawako really makes her day. 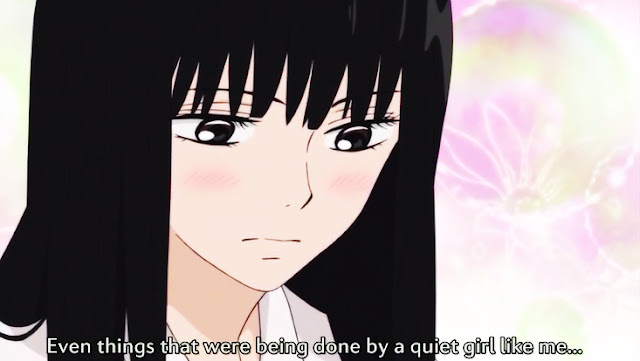 A friend that Sawako has not seen in a while starts to talk to her and ask her about her classes and the people she knows. Sawako starts to talk about how lively and wonderful Kazehaya is. Kazehaya is nearby and overhears her, but he and her friend misunderstand her, so her friend tells her to apologize to him. Kazehaya asks Sawako how he should interpret what she said, and Sawako tells him that it is a compliment. Kazehaya is happy to hear this so he comes over to talk with Sawako and get to know her better. 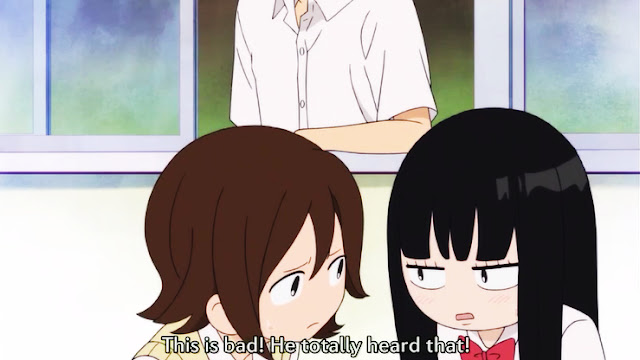 While Kazehaya and Sawako are talking, Kazehaya admits that he thought Sawako didn't like him. Sawako then tells him how she
always dreamed of being as lively as him and how she admires him. Kazehaya then compliments Sawako. He mentions that her name means lively. Kazehaya is the first person to call Sawako by her real name, instead of by Sadako, and he is the first to say these kinds of things to her. Sawako feels so happy and she starts to feel new emotions for the first time. 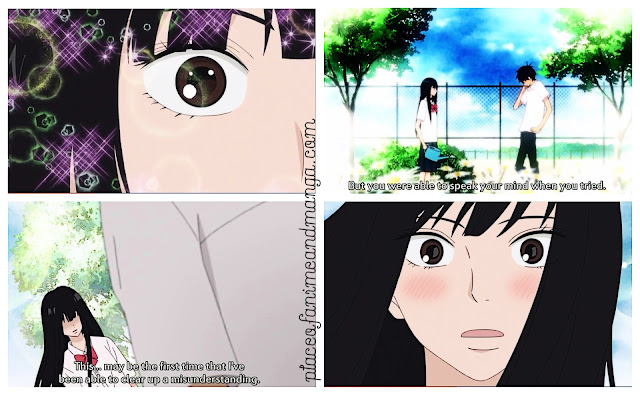 Kazehaya invites Sawako personally to go to the event coming up before the closing ceremony, and she decides to go. Sawako asks two of her female classmates if she could play a ghost in the event because it would make everyone happy, make the event more fun, and she could live up to her classmates expectations of her and fit in.

Sawako admits to these girls that she just wants to be useful to everyone, and that none of the beliefs about her are true. One of her classmates thinks her confession is weird, but the other one admires her greatly for her bravery. 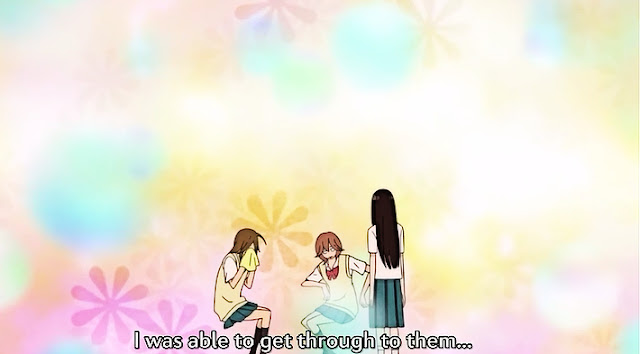 This is the first time that Sawako is able to get through to some of her peers and help them understand her, and she believes this happened because of Kazehaya's encouragement earlier that day. This makes Sawako feel very grateful to Kazehaya.

The anime now shifts to the day of the event, one day before the closing ceremony. Sawako dresses as a ghost in secret and scares everyone throughout the event. Sawako is so excited because she successfully scares everyone and so she feels everyone is enjoying the event and that she is being useful to everyone. 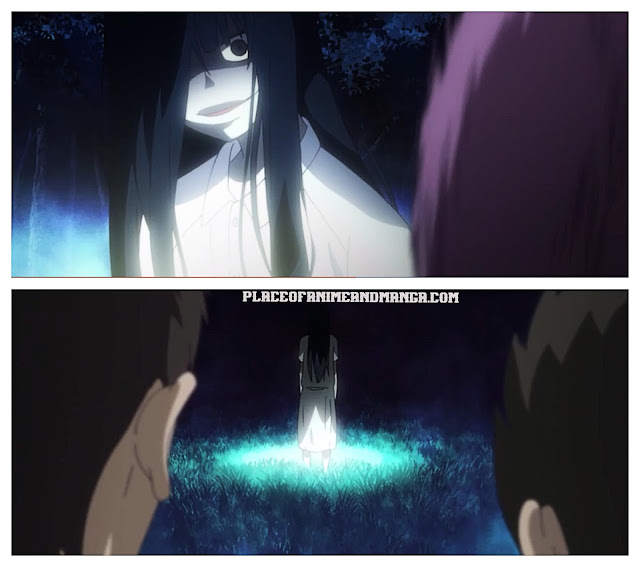 While Sawako is scaring everyone, Kazehaya comes across her. Kazehaya tells Sawako that she should have told him about her plans
since he is the coordinator of the event. Since Kazehaya didn't know, he thought she wasn't coming. Sawako tells him her reason for keeping it a secret, and she also tells him her feelings about how she likes the night sounds and beauty of night. during this time, these two bond more, and Kazehaya asks to spend the rest of the event there with her. 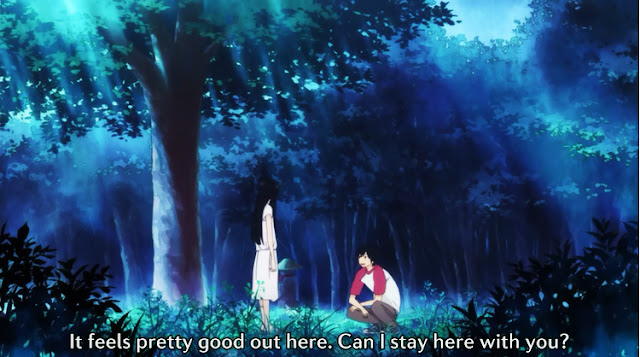 The two girls that Sawako talked to earlier who understood her come looking for Sawako to tell her that she is doing a good job scaring everyone. They also brought her a drink. These girls tease Kazehaya for keeping Sawako company, and Kazehaya is annoyed that they knew Sawako was coming as well and didn't tell him. Soon these two girls leave, and you can feel the friendship growing between them and Sawako. 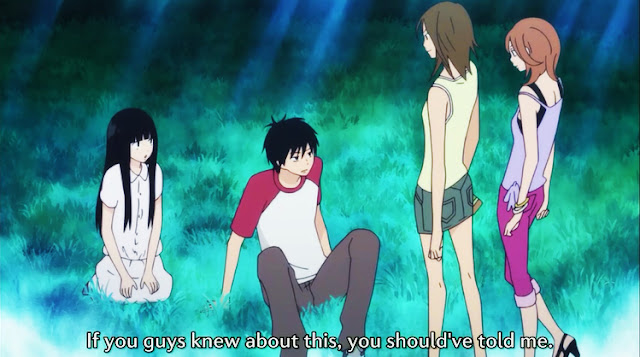 Sawako thanks Kazehaya for encouraging her. Sawako tells Kazehaya that it is because of him that she could bond with those two girls and
she is very happy that she played this part in today's event. Spending time with Sawako like this really gets Kazehaya embarassed and we can see that he really has a crush on Sawako; Kazehaya even almost confesses his feelings to her. Sawako has not figured this out yet though, but she feels even more new feelings because of Kazehaya. Kazehaya is helping Sawako have new experiences, so Sawako feels so happy to have met Kazehaya.

It is now the next day at school and Kazehaya did not complete the event, so the class suggests a penalty for him; one person suggests the penalty be dating Sawako for a week since they knew that he was alone with Sawako during the event. This is a punishment that no one would every want though, and for this reason, Kazehaya gets extremely offended. Kazehaya defends Sawako saying that even as a joke, that is not funny. Sawako is a girl and shouldn't be regarded like that.

Kazehaya apologises to Sawako and asks her not to regard anything that was just said. Sawako worries about Kazehaya's reputation
because he stood up for her, so she tries to clear up any misunderstandings and stands up for Kazehaya. Sawako expresses her opinion about Kazehaya's good qualities and kindness, and then leaves the classroom. 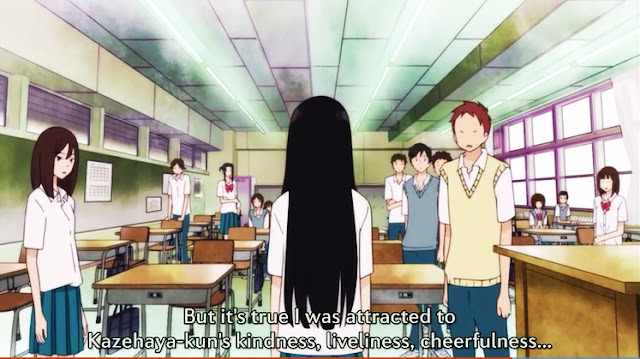 It is now the following day and summer vacation has started. As Sawako heads to school to help out with preparations for summer classes, she is finally able to let her guard down and cry because she told Kazehaya and everyone that there is no connection, nothing special between them. Sawako is hurt because even though she feels that she did the right thing to protect Kazehaya's reputation, she feels that Kazehaya won't speak to her now for saying there is no relationship between them. This causes feelings of loneliness and pain for Sawako. 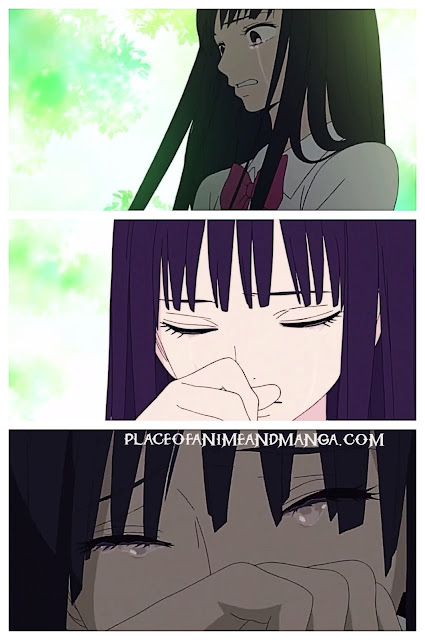 While walking and continuing to cry, Sawako sees Kazehaya waiting for her. Even though it is summer break, Kazehaya wanted to come give Sawako an apology present from their class for being rude and disrespectful to her yesterday.

Sawako starts to cry more because she is so touched by what her classmates did; she was touched by the fact that the misunderstanding was cleared up, and that Kazehaya is still willing to talk to her. 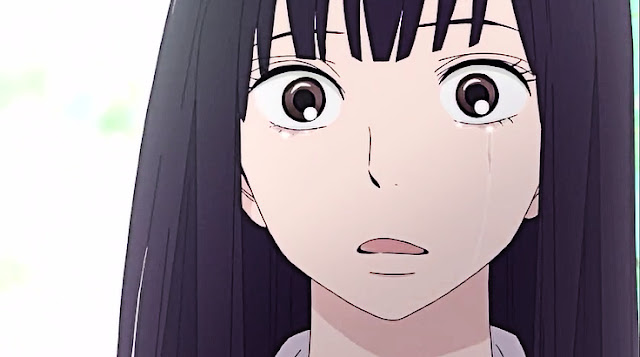 Kazehaya came to see Sawako for more than just the apology present though; he also came because he realized that Sawako does not understand his feelings, so he tells her that he wants to spend time with her, even outside of school during the summer break. This really shocks Sawako because she never expected it. 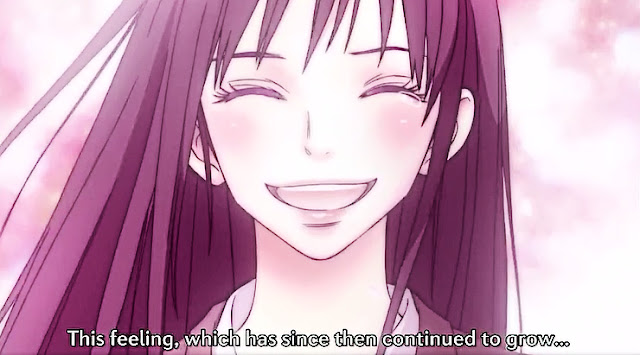 It is here that this anime ends, so we know that the anime will focus on the growing deepening relationship between these two main characters; it will also focus on how Sawako grows personally over time because of their relationship and the new friendships she develops with her classmates.


This is the kind of anime that teens and young adults enjoy watching. It is focused on school life, one's social life, and that time of self discovery and personal growth. The main characters in this anime develop friendships and love for the first time; their personalities, goals, hopes, and dreams develop and grow with them at this time while they experience life and learn life's lessons. So this anime does not have a heavy deep plot that will keep you on the edge of your seat; it is more of a simple anime that shows everyday life experiences for young people during one of the highest points in their life.


There is no extreme heavy violence, fighting, or war in this anime. There is no big world adventure or magic either, so this anime may not suit many people. I do recommend this anime though for teens, college students, and those who like to watch films with realistic romance that slowly develops over time.

This is a cute anime where the focus is on first time love, romance, friendship, acceptance, and personal growth. If you like these themes, then you will love this anime. 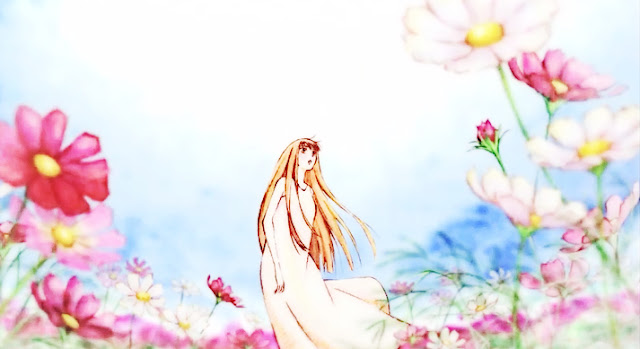