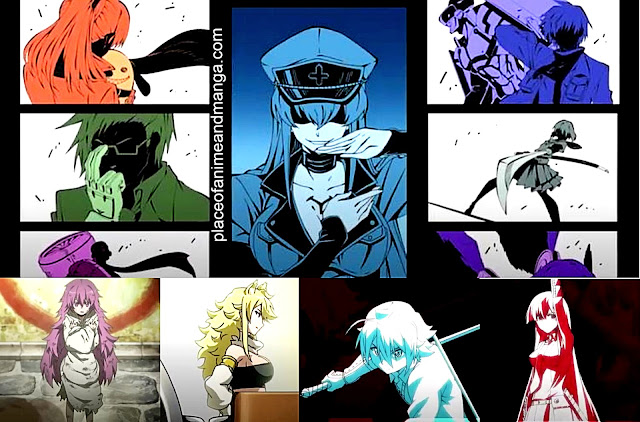 Tatsumi does not believe this information though. Instead, Tatsumi thinks that the imperial city is the key to saving his village from starvation, so he continues onwards towards the imperial city. 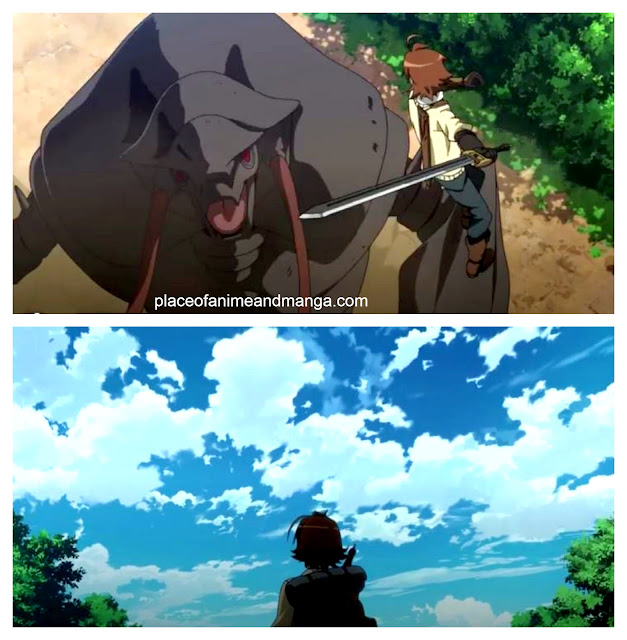 The music that plays in this anime in the opening is very beautiful. It has a sad Middle Eastern feel to it that is splendid, so I definitely recommend checking out the soundtrack for this anime.

In the next scene of this anime, we learn more about the imperial city. The imperial city has prospered financially, but it has become corrupt and a living hell for common people. People living there are constantly murdered, prosecuted, and tortured. Evil has entered the hearts of the people and completely taken over the imperial city. 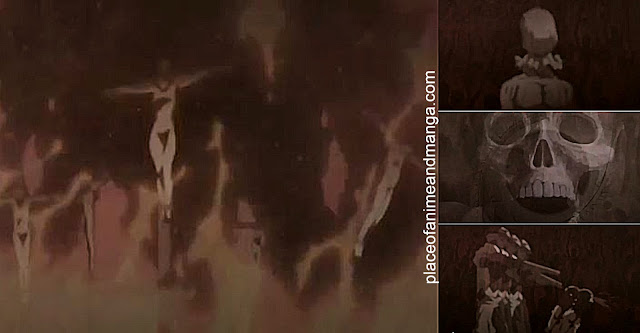 The people believe that the heavens does nothing about the evils happening, nor does it judge the cities inhabitants. As a result, a band of assassins have come together to enforce judgement on those committing evil acts within the imperial city.

Tatsumi does not realize any of this about the imperial city though, and soon, he arrives there. As soon as Tatsumi arrives in the imperial city, he is impressed with how big it is and how many businesses there are. Tatsumi intends to work as a soldier in the barracks, and use the money he makes, to take care of his village. Unfortunately, Tatsumi makes a scene when he gets upset that he can't start out with a high position immediately, so he gets kicked out of the recruitment office, and loses the chance to enter the military.

Soon after this happens, a woman notices Tatsumi. She offers to help him get into the military as an infantry soldier, so while Tatsumi treats her to a meal, this woman teaches Tatsumi that he needs connections in order to enter the military. This woman claims to have a connection who will get Tatsumi into the military, but he will need payment in order to do so. Of course, naive Tatsumi who has never been in the city, gives this woman all of his money. The woman cons him and Tatsumi is left without any money. 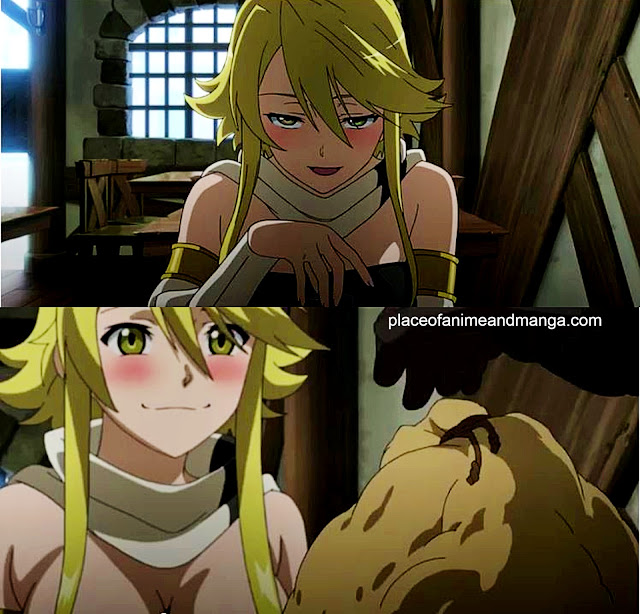 Since Tatsumi has no money now, he has to sleep outside, but a wealthy young girl named Aria, passes by and sees him. Aria offers Tatsumi a place to stay in her home for the night. Tatsumi hesitates after just getting conned, but in the end, he accepts the offer.

While staying in Aria's home with her family, he tells them about himself, where he came from, and why he came to the imperial city. 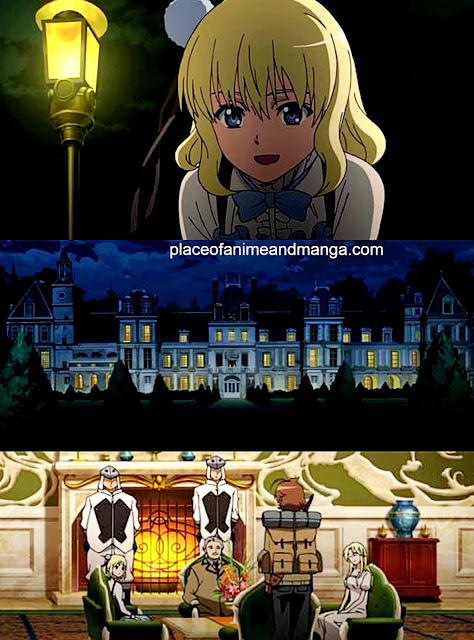 Initially, Tatsumi started his journey from his village to the imperial city with two others named, Ieyasu and Sayo. They made this journey in order to prevent their village from starving to death, since it is a very poor village. Unfortunately, they were attacked by bandits along the way, and got separated as a result.

After meeting Aria's family, Tatsumi rests, and goes out shopping with Aria the next day. While shopping, one of the guards secretly tells Tatsumi about the palace and the evil within it. It is here that we find out that the emperor is a child, so the country is really ruled by the prime minister; this is the reason why the city is so corrupt. This same guard also tells Tatsumi about the ins and outs of how the imperial city works, as well as about a group called Night Raid, which attacks criminals, the upper class, and high ranking officials late at night.

After shopping, Tatsumi returns to Aria's palace with her. He awakes in the middle of the night when Night Raid attacks the palace and kills the family members that took Tatsumi in. All the guards are killed instantly by Night Raid.

Tatsumi follows behind Aria as a guard who is escaping with her tries to hide her in the storeroom. This same guard tells Tatsumi to protect Aria, and Tatsumi does try to protect her, but he is no match for Ayame/a member of Night Raid. When Ayame attacks Tatsumi, she nearly kills him. 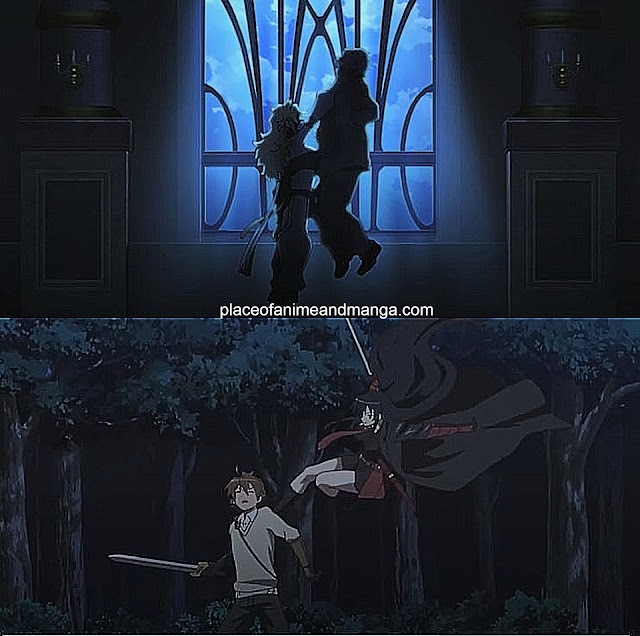 Fortunately, the woman who conned Tatsumi out of his money two days ago, decides to save him, so she stops Ayame from killing him, as well as shows Tatsumi the reason why Aria's family was murdered this night. It is here, that this anime takes a very dark morbid turn.

Tatsumi finds out that Aria's family regularly took in poor people that they found in the city, and tortured them to death for sport. Both of Tatsumi's friends who left with him from his village were found tortured in Aria's family storeroom as well. The girl, Sayo, was personally tortured to death by Aria herself, but Ieyasu is found still alive. 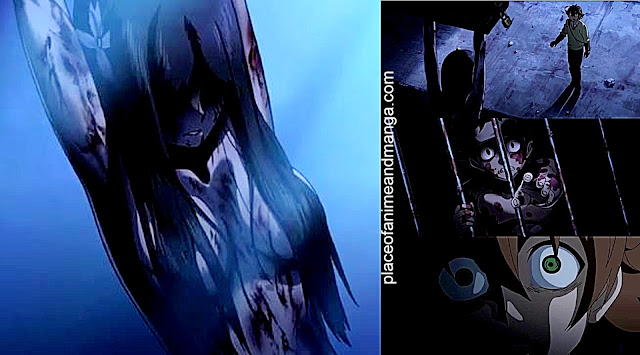 Tatsumi is shocked and horrified to hear this and see all the tortured mutilated dead bodies in the storeroom. Tatsumi is innocent and naive though, so he stills looks to Aria to deny these accusations. Horrifically though, she confirms them, and all the evil and darkness inside of her becomes exposed.

Aria proudly announces that there was nothing wrong with killing and torturing them since they were poor and as worthless as cattle. Upon hearing this, Tatsumi snaps; immediately, without any hesitation, he kills Aria in an instant.

Furthermore, though Ieyasu survived long enough to see Tatsumi get revenge for them, he also dies within a minute or so after being released, so Tatsumi loses both of his close friends in a horrible scarring way.

The concept presented in this scene of the anime is really dark and deep; it addresses the differences between social classes, and how some of the rich view the poor or how some races view other races. This concept dives deep into humanity, its faults, its cruelty, and its savagery.

In ancient societies and earlier years, this kind of environment and relationship between the powerful and the common people was very real; slavery is a great example of this, so this concept introduces real history to this anime; it brings history to life in a modern memorable way.

After touching upon this deep concept, this anime then becomes much lighter and comedic. The girl who conned Tatsumi out of his money two days ago named Leone, decides to bring Tatsumi along to work for Night Raid, since he has proven that he is strong, courageous, and can kill instantly without hesitation. 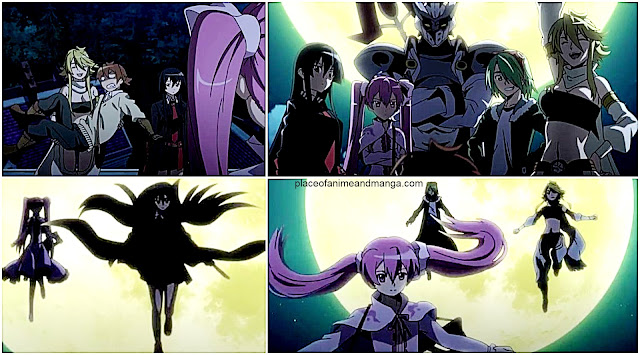 Tatsumi does not want to join Night Raid though, so Leone forcefully drags Tatsumi along with them back to their secret base. And just like that, Tatsumi becomes a member of Night Raid. The rest of this anime then follows Tatsumi's adventures and missions while working for Night Raid to bring justice to the victims and common people in the imperial city.

This is an excellent anime! One that I fully binge watched in just a few days! This amazing anime really focuses heavily on morality, justice, humanity, and the dark and beautiful aspects of human nature in a deep way. And despite that this first episode is extremely dark, the rest of the episodes are not nearly this morbid, I promise. The producers of this anime really went all out in this first episode, and the adventure continues to unfold throughout the series, so there is not a dull moment in this anime!

Of course, this anime won't appeal to everyone, since it is a violent political war-themed anime. There are also no heavy romance themes in this anime. There is some romance of course, but it is for very brief random moments. Some of the romance is quite spicy and sensual, though it may last only a minute or so. There are also a few women who take a liking to Tatsumi, which leads to some comedic and sweet moments, so, although this anime is intense and violent at times, it is also funny, all while focusing on loyalty, friendship, unity, and morality.

All-in-all, I love this anime! It is very complex, deep, and it touches upon sensitive but important concepts, so I do highly recommend this anime. The themes in this anime will appeal to many teens and adults, but since this is a mature anime with very dark themes, I don't recommend it for kids.