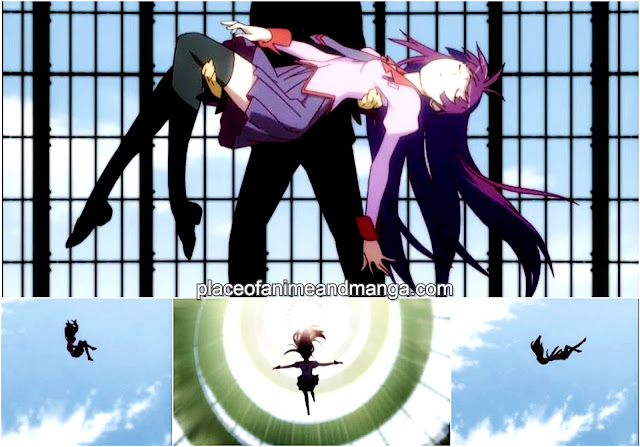 Produced By: Aniplex of America & Kodansha


This anime starts out very interesting. You can tell that it is a dark anime with a focus on blood, fighting, gore, and even religious aspects. The telling of this story is also unique since it starts out as if it is telling a story/storytelling. The graphics are exceptional as well with deep in depth color and detailed designs with a heavy focus on white, black, brown, and red colors.

Though we get glimpses of what may happen in this anime in the beginning of this first episode, the true start of this story is when the main male lead character, named Araragi Koyomi, catches the main female lead, named Senjougahara, as she is falling down from the sky. There is something unnatural about this meeting; Senjougahara's body also seems to be weightless, which further adds to the mystery surrounding her. Araragi had seen Senjougahara before in school and noticed her, but it is at this moment when they meet again that the story truly begins. 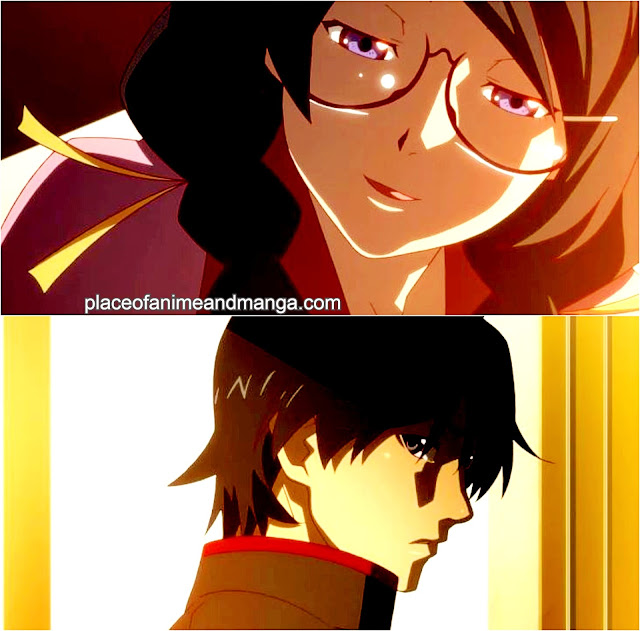 Tsubasa and Araragi stop talking about the festival when Araragi starts to ask about one of their female classmates; the same classmate that he caught falling from the sky, Senjougahara. We learn a lot about Senjougahara here, including how she is often sick and absent from school. How she lives in a mansion and is well-off, as well as how her personality was years ago in middle school. 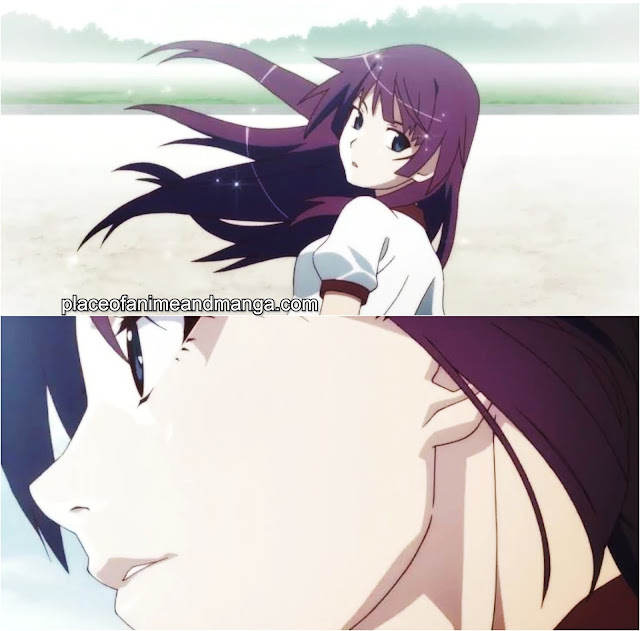 Araragi is really unnerved by all that he hears about Senjougahara, so he makes an excuse to leave early. As soon as he walks out of the classroom, Senjougahara is there threatening him with a razor blade and a stapler inside of his mouth. The soft image of Senjougahara that we saw at the beginning of this anime is completely gone. We can now see her true character, which is much darker and deadlier.

During this tense moment, Senjougahara explains her body's weightlessness; how her weight was taken away by a crab, and how she ended up falling from the sky because she slipped on a banana peel.

Senjougahara says that she will not harm Araragi if he keeps the secret about her body's weightlessness. Of course, Araragi agrees, but Senjougahara still hurts him anyway. She staples the inside of his mouth with the stapler, though she does not cut him with the razor blade. Senjougahara terrorizes Araragi and tells him to never acknowlege her again.

As soon as the shock of what happened with Senjougahara wears off, Araragi makes a run for it. He runs into Senjougahara again on the stairs, and she misunderstands him. She assumes that he is resisting what she told him to do, so she brings out all of these weapons to attack him. Araragi does not wish to fight her though and instead, he offers to help her. Araragi shocks us all by showing her that the injury she gave him left no wound, as if the injury never happened at all. 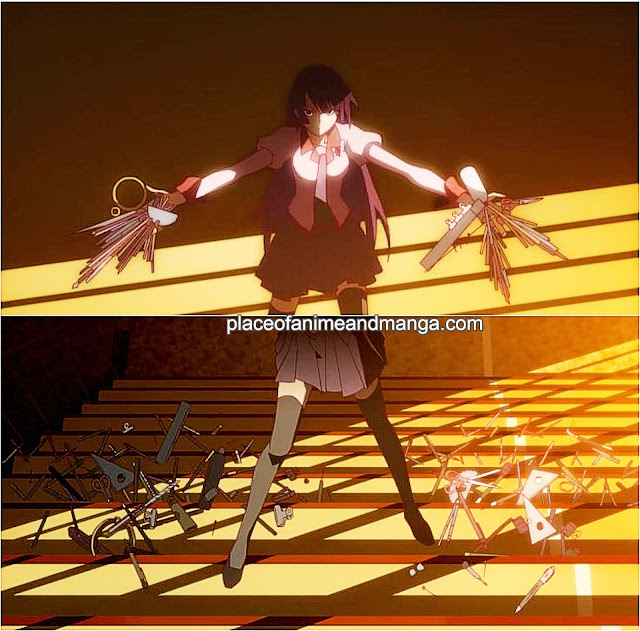 Araragi starts to explain to Senjougahara why the injury left no wound. Apparently, with the help of someone named Oshino Meme, Araragi was able to transform from a vampire back into a human, but some side effects of being a vampire remained, such as instant wound healing. A vampire bit Araragi, and that is how he became a vampire himself.

Araragi takes Senjougahara to see Oshino, but he cares for Oshino's safety so he has Senjougahara leave all of her weapons with him before going in to see Oshino. Senjougahara is a real piece of work. This girl carries boxes of sharp weapons and blades around with her at all times. It makes you wonder what kind of life she lived if she needs to do this.

Senjougahara is taken upstairs inside of an old rundown building where Oshino lives. They are introduced to each other, and then Senjougahara tells him her story about the crab who took her weight to see if Oshino can help her. Oshino explains to her that it is most likely a god who did that to her. Oshino believes that he can help her though, so he agrees to do so. It is here that this first episode ends. 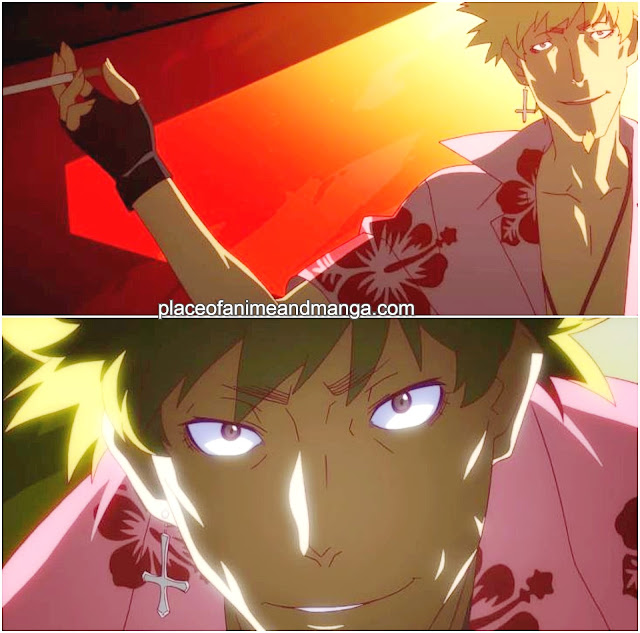 Final Thoughts? Is This Anime Worth Watching? このアニメは見ていて面白いですか.

This anime has some interesting elements to it. It incorporates aspects from religion including Christianity, mysticism, and Shintoism, as well as the traditional school themes and the supernatural in the form of vampires, gods, and myths.

Based on watching this anime so far, I have an idea about the direction that it will go in. I think it will focus on mythology and supernatural creatures that are found in religion. I think that more odd people like Araragi and Senjougahara with beyond human capabilities will appear, but other than this, it is still a mystery how this anime will turn out or how the other episodes will be.

I think that I will have to watch a second episode to see if I want to continue watching this anime. There is not enough information in the first episode for me to decide if this anime grabs me or not. I am a huge fan of vampire animes though, so that alone makes this anime appealing to me. If you like the supernatural or mythology in anime, then I think this one will be a hit for many of you, so I do recommend checking out the first two episodes of this anime. 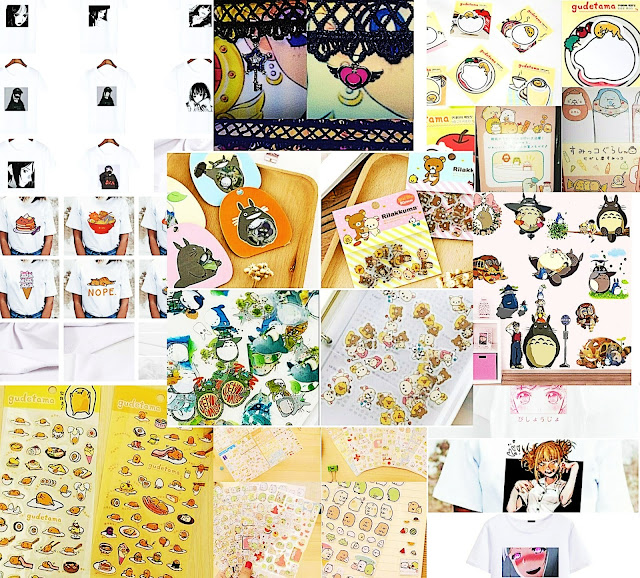