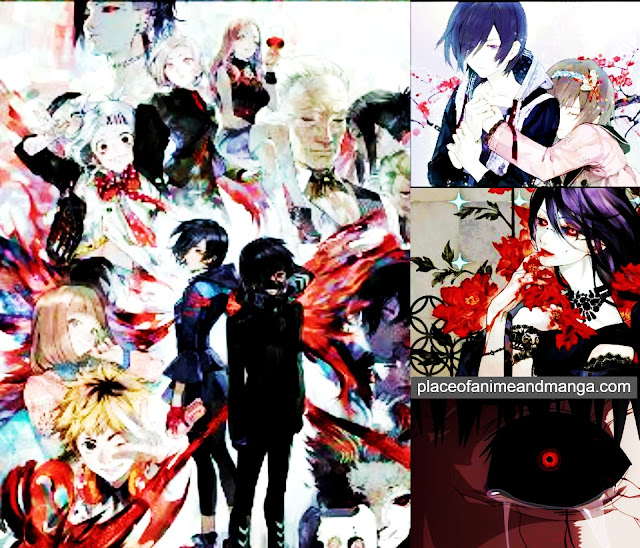 
This anime starts out very dark and you can immediately tell that this is a crime and militaristic anime, since it starts with a police report dispatching officers to the scene of a crime. The crime is quite gruesome as well. There are multiple piled up naked dead bodies that are covered in blood as a young woman eats them. This woman is drinking their blood and seems to get some sexual pleasure from it. This woman is what is called a "ghoul". 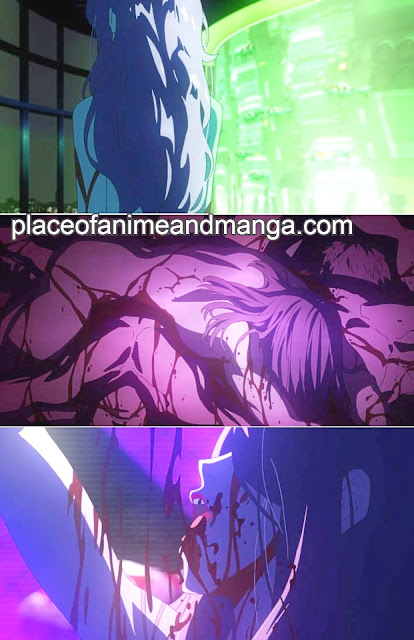 A man arrives on the scene and stops the woman from feeding. He attacks her, but she gets away. After this scene, this anime then enters into a normal scene where people are sitting inside of a cafe on a nice day while hearing the news about the dead bodies that were found the previous night. Two young men, Kaneki and Hide, are in this cafe talking about girls and dates. Kaneki is at this cafe today because the girl that he likes regularly comes to this particular cafe.

Kaneki and the girl that he likes, who is named Riza, are reading the same book, so Kaneki uses this as an excuse to approach Riza and talk to her. These two end up sitting down together at the same table and talk about the author of the book. Kaneki and Riza stay together for hours until evening. Kaneki is awkward and shy, but the date goes well, so Kaneki walks Riza home. 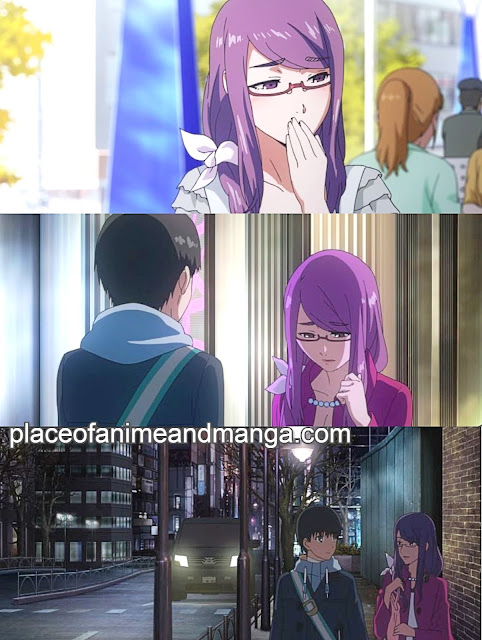 Riza confesses to Kaneki that she likes him, but Riza is not as she appears. She ends up leading Kaneki down a dark alley, where she lets her true form come out, which is that of a ghoul. Riza attacks Kaneki and starts feeding on him. 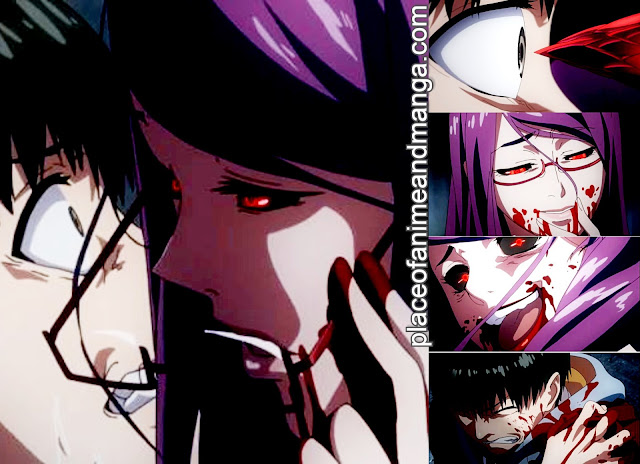 Riza attacks Kaneki brutally and his body takes a terrible beating; he is even thrown into a wall, and Riza toys with him for a while in a deadly cat and mouse game. 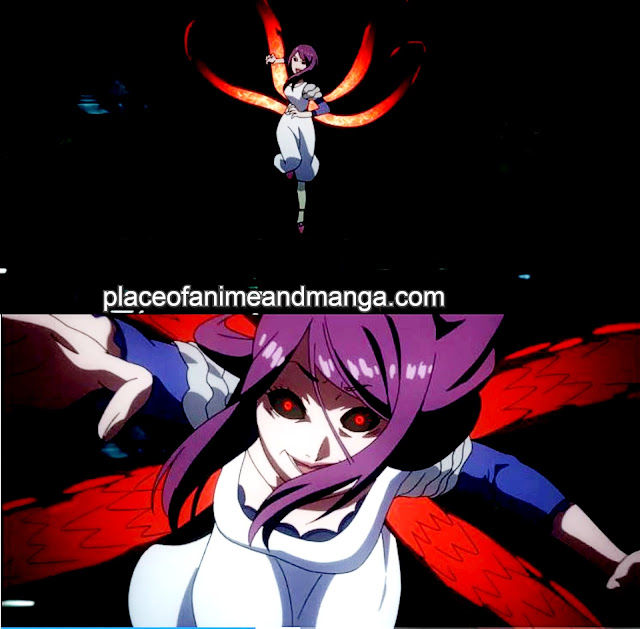 Riza thought that Kaneki had died quickly, but before he fully dies, he is saved by someone who kills Riza. Kaneki is then taken to a hospital and stitched up. He survives the attack, and for a short time, Kaneki looks grotesque after the surgery he had to heal the wounds that he received from Riza. 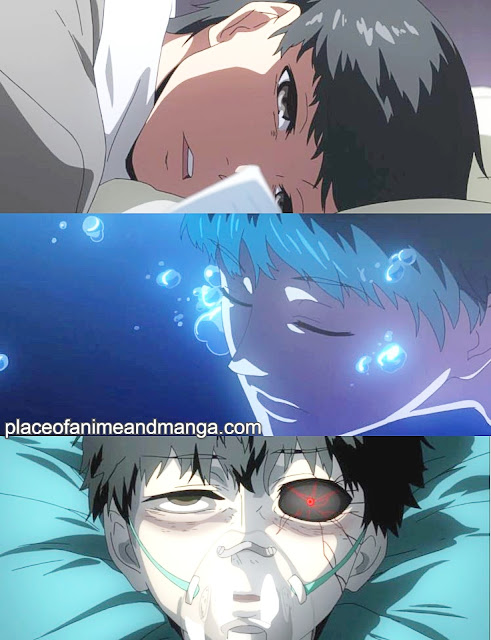 When Kaneki fully recovers, he looks normal once again, but food no longer tastes the same to him; it is as if Kaneki lost his taste buds. This change is common though in ghouls, so although Kaneki has survived Riza's attack, he is not as he once was and never likely will be again. Kaneki has now become the same as Riza; he is now a ghoul as well.

When Kaneki finds out that he is a ghoul, he hides away from society at home. One day though, Kaneki goes outside and is horrified to discover that he is drawn to human flesh. Disgusted with himself, he runs home. When he looks at himself in the mirror, he sees that his face has become that of a ghoul, so Kaneki tries to test his body to see if he is truly a ghoul by stabbing himself with a knife. Knives do not hurt ghouls, so as expected, Kaneki's body is not harmed by the knife at all. 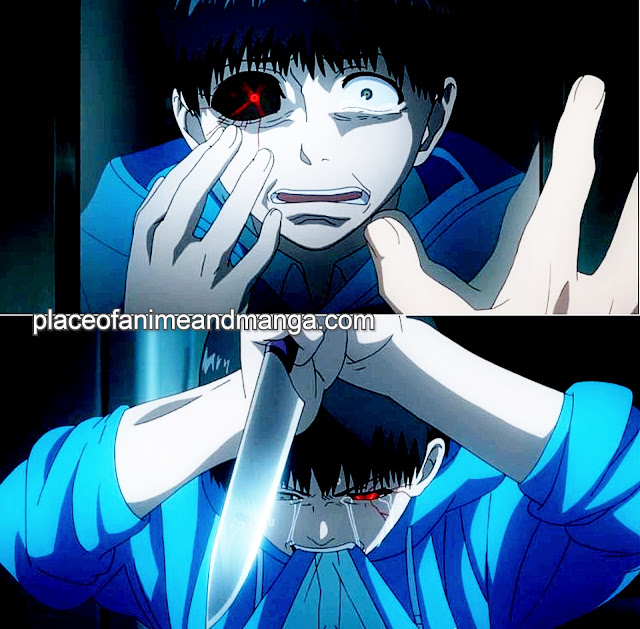 Kaneki is at a loss as to what to do with this new change in his life. When the hunger suddenly hits him hard, Kaneki leaves his home and finds himself outside being drawn by an amazing smell, the smell of food. What Kaneki finds though is not food, but actually the smell of a ghoul eating a mangled corpse. Kaneki becomes so distraught by this reality that he cries. The ghoul that is feeding sees him, and is friendly and kind to him; he even asks Kaneki if he is okay, and offers him some of his food.

Another ghoul comes along at this time as well, and kills the ghoul that is feeding because that ghoul has killed a human in his territory. It is here in this scene that we learn that ghouls are territorial just like carnivorous animals, such as wolves and lions. We also find out that ghouls have two red eyes, but for some reason, Kaneki only has one red eye; it is like Kaneki is not a full ghoul, but only a half-blooded one.

This new ghoul is about to kill Kaneki next for being in his territory, but another female ghoul appears named Touka. Touka fights this ghoul and wins. She forces this ghoul out of the territory, and saves Kaneki. Touka offers Kaneki the leftover remains from the corpse to eat, but he refuses because he feels that he is a human, and if he eats it, he will no longer be human. 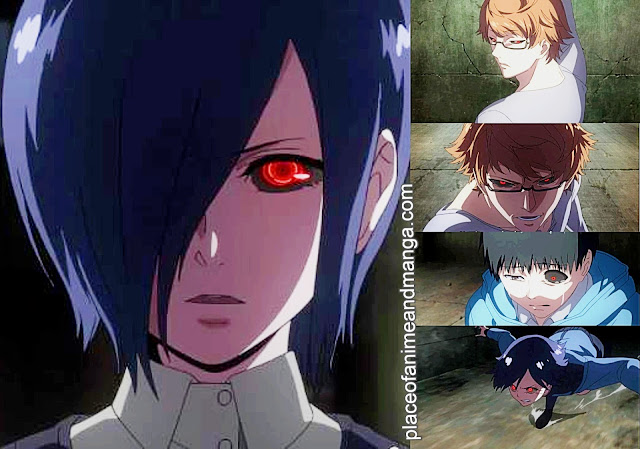 Touka finds Kaneki's refusal to eat ridiculous, so she tears off a limb from the mangled corpse and shoves it down Kaneki's throat to make him eat. It is here that this first episode ends.

Final Thoughts? Is This Anime Worth Watching? このアニメは見ていて面白いですか.

I have heard of this anime many times from other anime lovers, so it is extremely popular and has been for quite some time. After watching this first episode, I completely understood why. 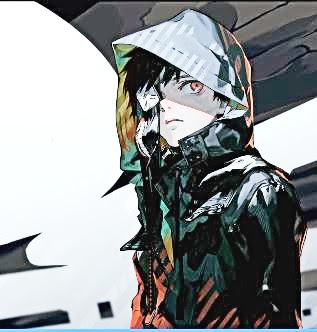 This anime also has some many interesting elements and themes to it, so I definitely plan to watch more episodes. I think this is an excellent anime, and if you love more mature animes with crime, romance, supernatural and vampire themes, then I think you will really like this anime. This anime really is an addictive one so I do highly recommend it.