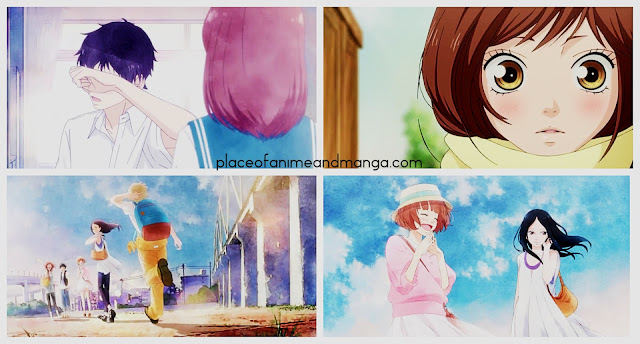 This popular anime starts in the summer with a young girl running through the rain ☔ because there was a sudden downpour. She takes shelter from the rain at a shrine 🎋. While there, she sees that another young man is there as well taking shelter from the rain. It is here in this moment that these two have a sudden unexpected meeting. 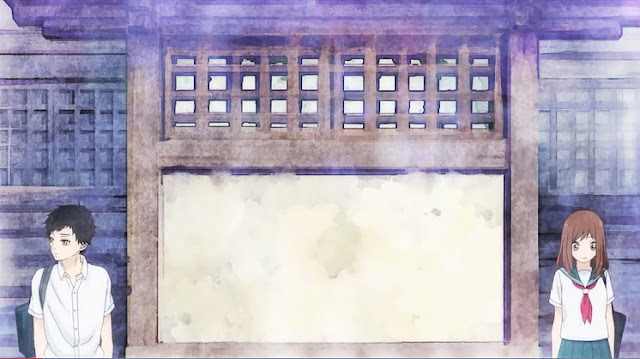 The girl, Yoshioka Futaba, knows the boy though, and she calls him by his name, Tanaka. Futaba tries to talk to Tanaka by asking him if he will attend a festival 🎐 coming up. Tanaka responds by Futaba his gym uniform to dry off with in order to prevent her from catching a cold. Then Tanaka teases Futaba in a cute way. These two main characters are adorable and very shy. Tanaka is appealing, shy, cute, and comparable to a Japanese female. 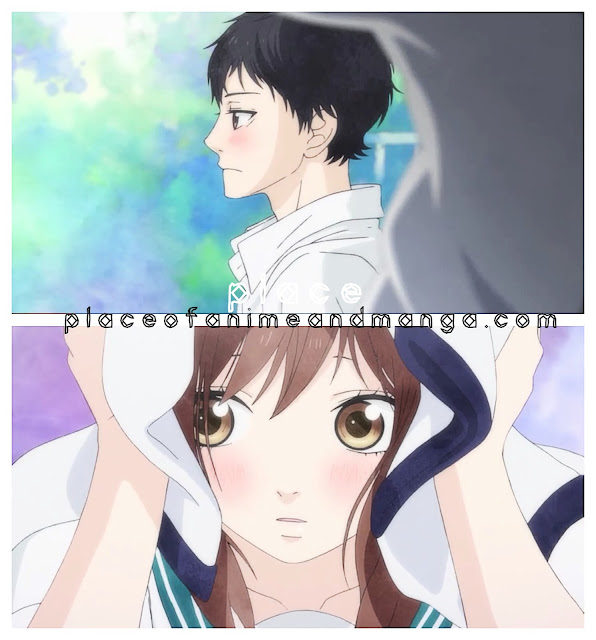 At school, Futaba brings Tanaka the shirt he loaned her during the downpour. At this time, Tanaka asks Futaba if she made plans with her friend. Futaba tells him that she didn't, so he asks her to spend time with him and sets a time and place for them to meet. This would be a date, and the way Tanaka gets so shy and embarrassed when he asks Futaba out is absolutely adorable! 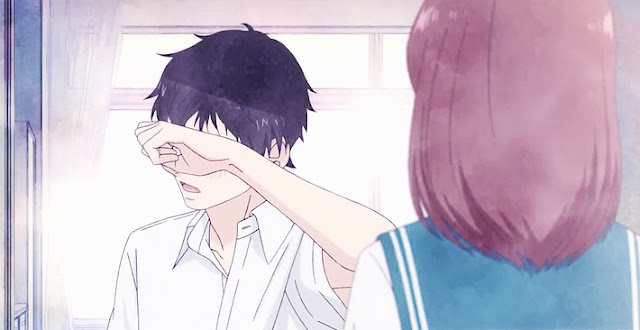 Unfortunately, one of Futaba's classmates sees her interaction with Tanaka, and bugs her about what their relationship is. This really annoys Futaba, so she shouts out loud how she hates all boys. Tanaka hears this, so he stands her up and doesn't meet her at the place they were suppose to meet at. Futaba really wanted to see Tanaka though so she waited for him a long time. These two don't talk again after this, and one day while at school, Futaba finds out that Tanaka changed schools during summer break.

Finding out that Tanaka changed schools really makes Futaba think about him a lot and how he was. Tanaka was easily embarrassed, awkward,
uncertain, and he seemed to be fumbling through things, but despite all this, Futaba still really loved and cared about him. Even now, Futaba confesses that she still cares for Tanaka and that he has a place in her heart. Futaba wishes that she could have gone back to those days when they were together. 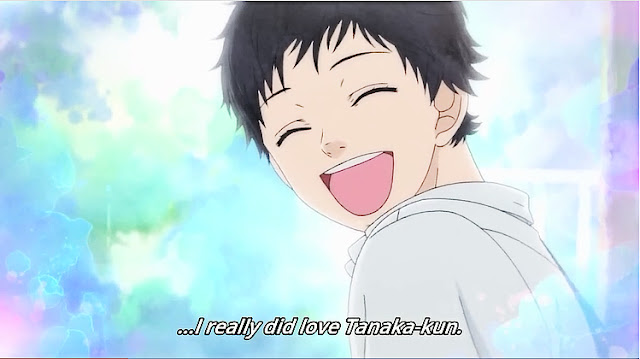 Three years have passed since Futaba and Tanaka saw each other. Futaba is now in her third year of high school. She has friends, but she
is not seen as very feminine in the eyes of her classmates; she created this image for herself on purpose though. 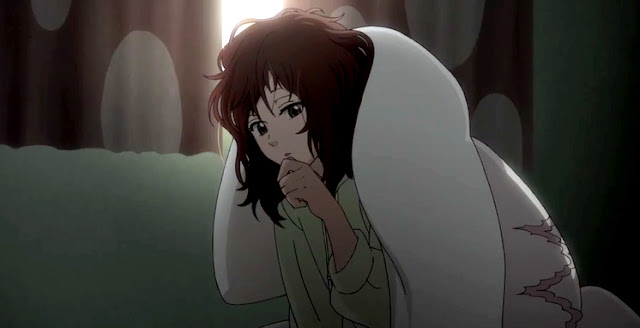 There is a girl in her class, Makita Yuuri, who is well liked by the boys and very feminine. This causes Yuuri to be hated and isolated by all the girls in the class. Futaba was just like Yuuri in middle school; she was isolated by her peers; girls did not like her because they felt that she was stuck up and getting too much attention from boys. As a result of this, Futaba changed herself to be more well liked by girls by acting a bit masculine and re-creating herself. Since Futaba understands how it feels to be isolated and not liked by other girls, she feels sorry for Yuuri and wants to talk to her.

Later on while Futaba is walking with her friends at lunch, Futaba hears others talking to someone named Tanaka. This reminds her of the Tanaka that she is in love with. When Futaba bumps into him, she believes that he is the same Tanaka that from her past, but someone calls him by a
different name, so she believes that she was mistaken and confused him with the wrong person. 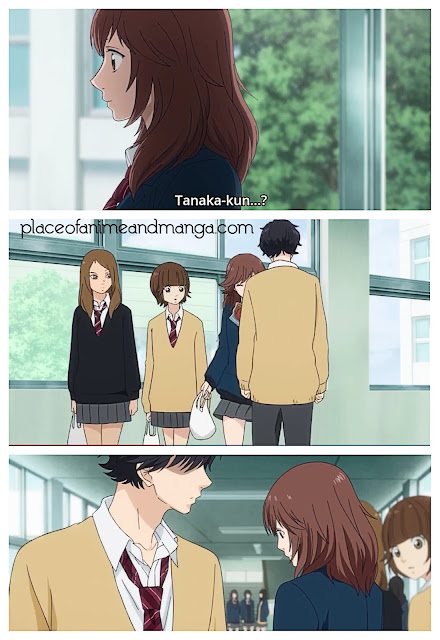 While walking home from school, Futaba encounters the person who looks like Tanaka again. He lives in the same neighborhood
as her. He goes to the temple where they took shelter from the rain; this makes Futaba believe that he is Tanaka again, so she follows him
and calls him by his name. He answers, but corrects her. He tells her that his name is now Mabuchi. Tanaka then says the exact same
thing that he said to her back then when they took shelter from the rain at the shrine so as to let Futaba know that it is really him. 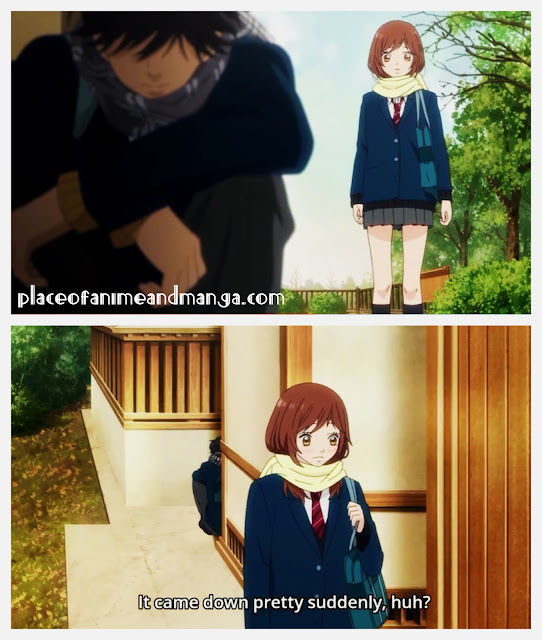 Mabuchi explains to Futaba that he changed his name when his parents divorced. Although he is different, even his voice has changed, it is still as if no time has passed between these two; the bond between them is still there.

At this time, Mabuchi also tells Futaba that he has been here for almost a year already at the same school as her. It took Futaba this long to notice him. Mabuchi recognized her immediately though, and he has been waiting patiently for Futaba to notice him.

These two continue to catch up and talk about how each other has changed, and as they talk,  Futaba is unnerved by some of the changes in Mabuchi; she doesn't like some of them. 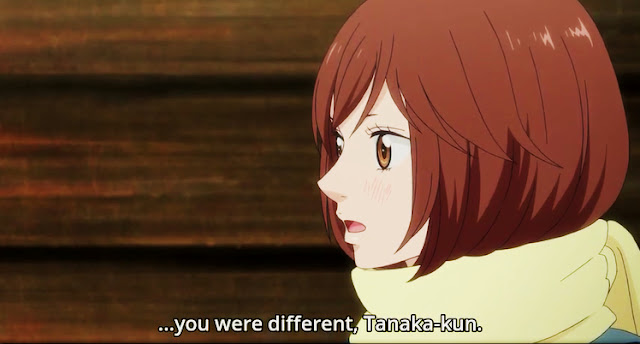 Mabuchi offers a reunion hug but then when she refuses him, he thinks that it is because she still hates men like she said she did back then. This is not the case though, so Futaba tells him that that is a lie, and that Mabuchi was always her exception. Mabuchi then starts to act shy the way he did back then. He takes what Futaba says as a confession of her feelings for him, so he confesses to her that she was always his exception as well; he tells Futaba that he loved her. This is one of the happiest moments in Futaba's life so far, and it makes her believe that they can go back to how things were. 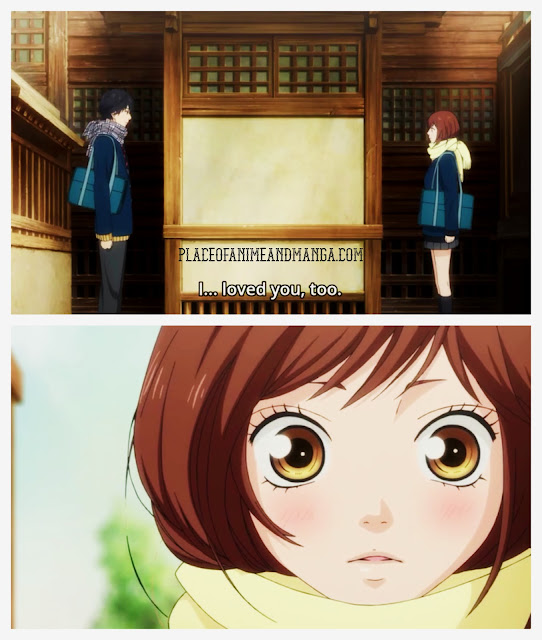 Sadly, Mabuchi tells her that it is impossible to go back now; they are too different and the past is the past. Hearing this, Futaba begins to cry because she feels that he is telling her to forget her feelings for him and move on.

After saying these things, Mabuchi
leaves and walks away from her. Futaba had hoped this whole time, that they could talk properly about their feelings. Hearing Mabuchi's strong words, even as he seemed lonely while saying them, hurts Futaba a lot. 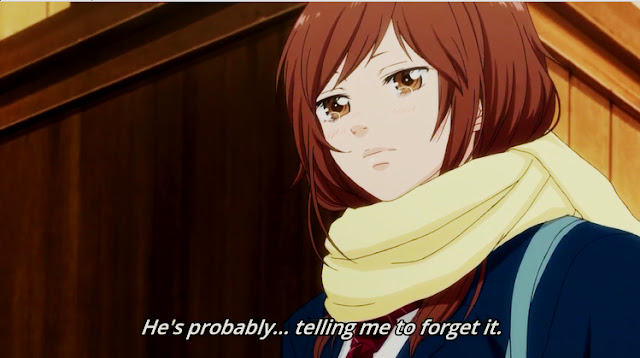 At school the following day, Mabuchi talks to Futaba during lunch. Futaba gets into trouble though when a woman who works in
the school cafeteria accuses her of not paying, even though she did actually pay. Mabuchi defends her and insists that the woman apologize to her. The woman does apologize, and this ends the conflict. 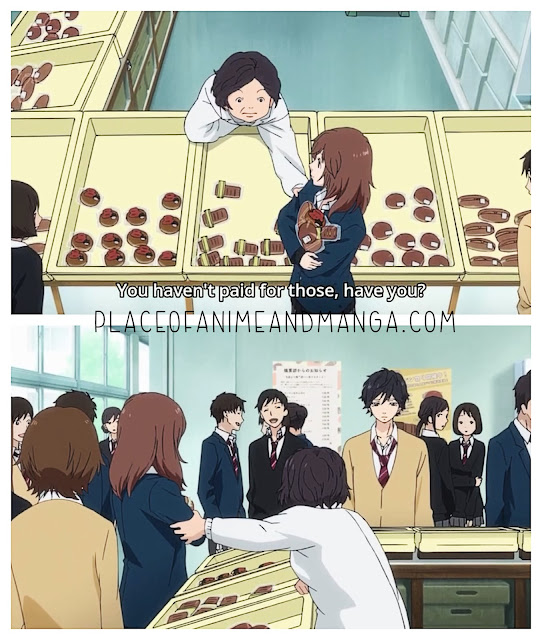 Futaba runs after Tanaka in order to thank him for helping her, but he calls her out for being too easily pleased and having cheap friendships.
Throughout the whole conflict with the cafeteria woman, Futaba's friends did not even believe that she was innocent and that she didn't steal; they didn't even try to defend her. 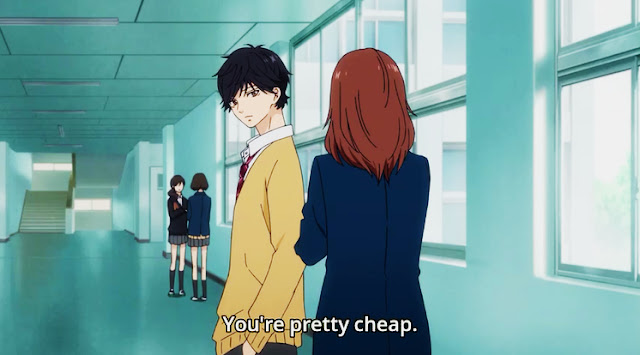 Tanaka doesn't respect Futaba for having such cheap friends, so he is very cruel and harsh to her. He even tells her that he doesn't care about her, and that she needs to call him "Mabuchi", since the Tanaka that he was is now gone. Hearing his such harsh cruel words from him, makes Futaba lose hope that they could ever go back to how things once were. This makes her acknowledge that the Tanaka that she loved is gone, and this is where this anime ends. 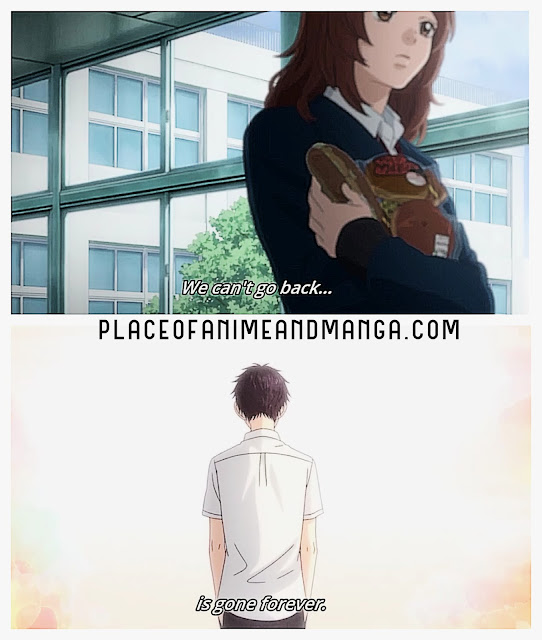 The focus of this anime will be on the main characters, Futaba and Mabuchi's, relationship; the changes they go through as they go through school; their personal self-growth, and the changes in Futaba's friendships and relationships with others. Perhaps towards the end of the anime, we will even see Futaba become comfortable enough with herself, that she will start to show her true personality to others.

This anime has a simple romance that develops naturally, slowly over time as the characters learn about themselves, as they change and grow, and as they experience life. This anime is all about youth, self-growth, self-improvement, love, friendship and relationships. This is the kind of anime that would be popular with teens, those in school, and young adults.

There won't be any extreme situations, intense violence or war, adventurous journeys, or anything unrealistic like magic in this anime. So this anime is kid safe. If you are into simple animes like this one that focuses on relationships and personal growth, then you will like this one.