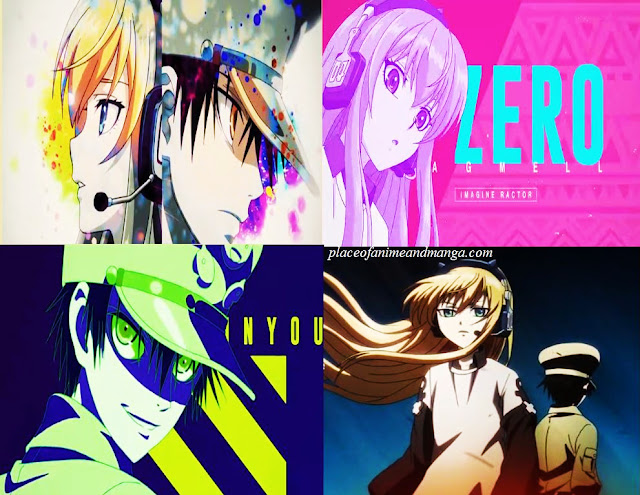 This anime is about a new continent⛰ that emerged that was full of valuable resources 🌿, unlimited possibilities, wildlife 🐗, and plants🌱. Many people wanted the resources on this valuable continent so many explorers came to claim them for themselves. However, this continent is very beautiful, but it is also very dangerous, so many people die trying to get these resources. This continent is called Magmel.

Thus, Gunjou no Magmel focuses on the explorers who go to Magmel, their discoveries/the valuable resources found in Magmel, and the adventures of a man named Angler, who finds and rescues people who go missing in Magmel. 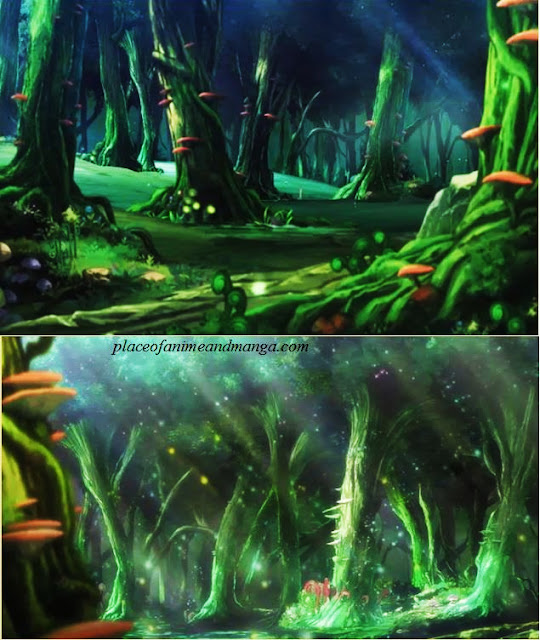 Seeing this continent, it is very beautiful and full of nature 🌻. The nature scenes remind me of the forest scenes in Totoro and Princess Mononoke. They are so beautifully bright, vivid, detailed, and colorful.

The creatures 🐞 that live in Magmel, had a Nausicaa of the Valley of the Wind vibe. These creatures are unique and prehistoric-looking, but they are also very dangerous, poisonous, and parasitic. 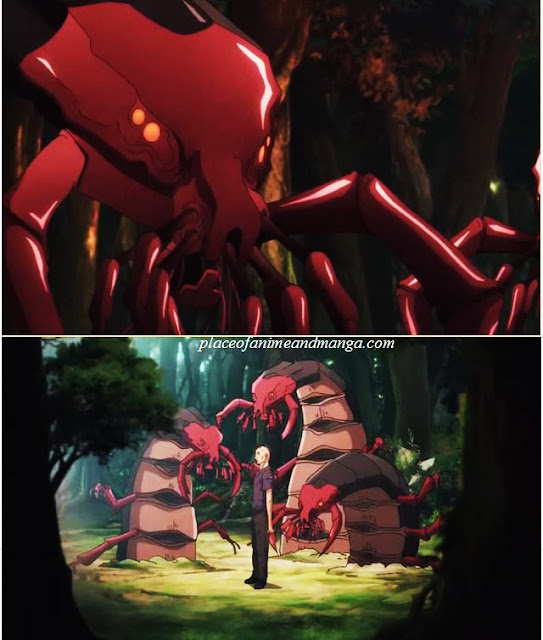 In addition to man-eating monsters, there are also robots and high tech machinery, devices, and gadgets. 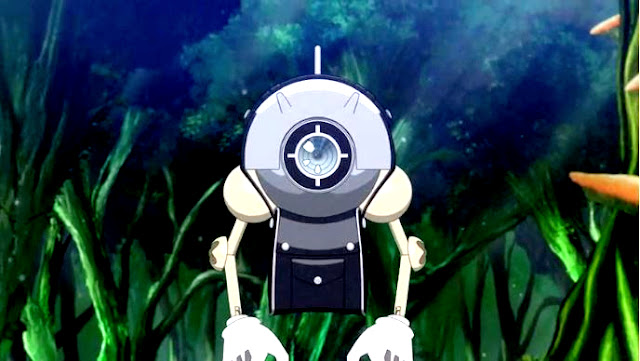 The graphics in this anime are very HD, and the intro scene where people are walking on the street after the opening them song, reminds me of the movements of players in a role-playing game. After this scene though, the movements of the characters become more normal and natural in appearance. 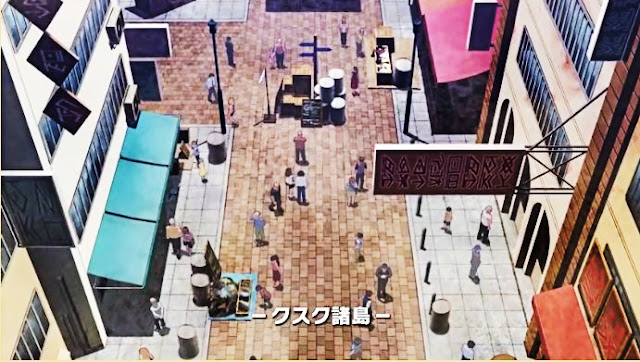 When it comes to the design and appearance of the main characters, they are excellent and I love how they look. They are beautifully designed with intense color and graphics.

The appearance of the main male character, Angler, is similar to Blood Lad, because of his hair cut, hair color, and the sharpness, shape of his eyes 👀. Angler's eyes really suit him though and I think they add to the appeal and attractiveness of his character.

Most animes make their characters look everything but Asian or Japanese, but Angler looks very Asian and his eyes are very sharp and slanted. In addition to his Asian appearance, Angler also looks very much like a soldier. 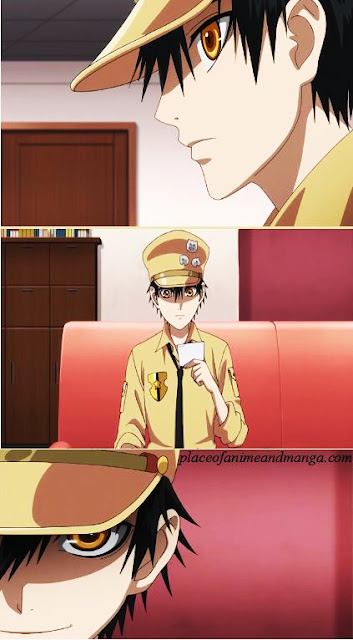 The music that occurs throughout this anime sounds Egyptian, and like traditional Chinese or Japanese music at times, which I love. The music is perfect and it really suits this anime; it is exciting and soothing at different times and it plays periodically throughout this episode.

This first episode of the series focuses on a young boy who has been very sick and who has had a weak body since he was young. This boy named Kurikusu, is searching for Angler because he needs his help. He brings money to pay for Angler's services. Angler's job is to search for and rescue people who go missing in Magmel. Angler is hurting for money 💴 since he hasn't had any customers in a while, so the money offered by Kurikusu to find and save his brother, comes at the perfect time. 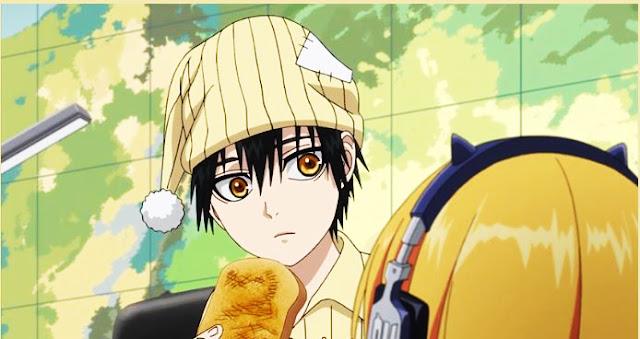 This anime then moves forward with Angler accepting this assignment. Angler takes Kurikusu to Magmel and teaches him about the place. Angler appears to leave his female assistant/servant who appears to be a robot behind, but actually, he takes her with him. She follows behind them in secret and watches from the body of a small robot from outside of Magmel. This small robot is named Zero. She follows Angler's commands through a communication device in Angler's ear👂. 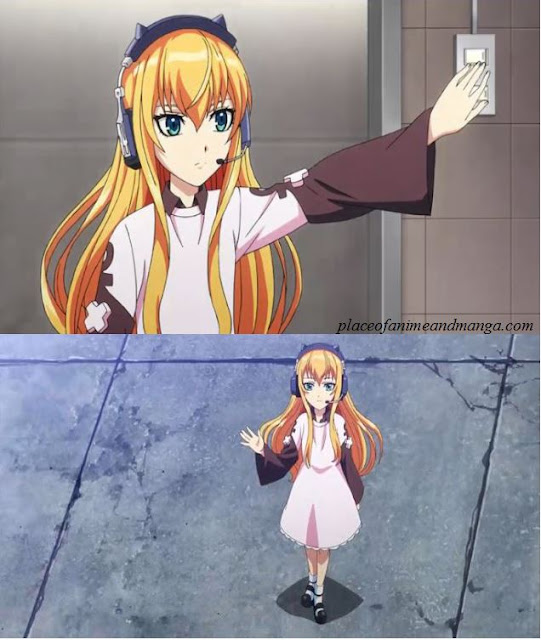 As Kurikusu and Angler continue their travels through Magmel, we get to learn more about this unique continent and the types of dangerous creatures that live on it. During their travels, we also get to see Angler's personality and character. Angler will say one thing, but do another, and he is very kindhearted; he even helps people for free without telling them.

Angler's assistant Zero reports to him about any creatures up ahead that he will have to fight or avoid in order to keep moving forward through the forest.

In the first fight scene, we get to see how strong Angler is. The weapons in this anime are more HD than the rest of the anime. Angler can move very fast and with great agility and accuracy. Angler's weapon is a sword and thread that appear in the form of electricity as he wills them. For Angler, the creatures he encounters in this first fight scene are easy to defeat and he chases them off in just a few minutes. 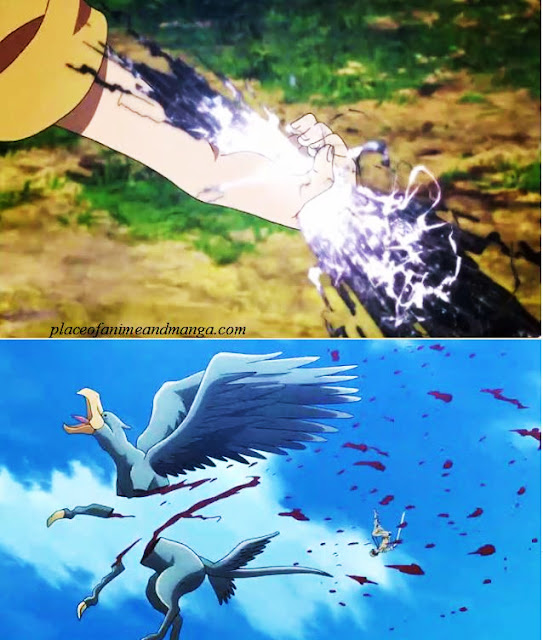 While Angler was fighting, he had Kurikusu hide away from the fight to protect him, and during that time, Kurikusu ran into his brother. Kurikusu's brother went to Magmel with their mother and father in order to find a flower plant that blooms the Tear of Epona🌷, which would cure Kurikusu from the sickness he has had since he was young. The Tear of Epona is a well-sought-after item and it fetches for a huge sum of money 💱. Kurikusu's brother tells him that he found this flower and he takes Kurikusu to it, but then, Kurikusu discovers something horrifying; he discovers that this flower only blooms over corpses, and Kurikusu sees the dead bodies underneath it. 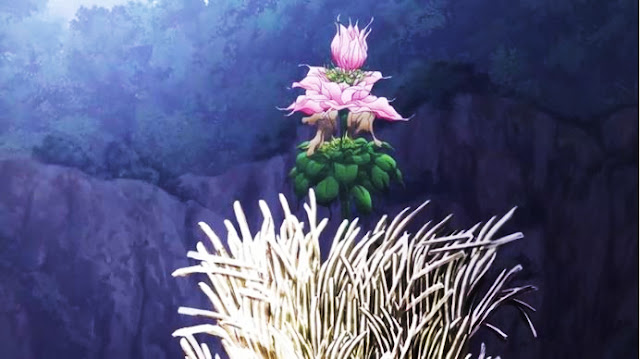 From here, this anime takes an even darker turn. Kurikusu's brother tells him that 2 dead bodies were not enough for this flower to fully bloom, so while Kurikusu's back is turned, his brother kills him in order to offer his body to the flower. While Kurikusu is dying, his brother admits to killing his own comrades to feed the flower, and we later discover that he killed their parents as well in order to feed the flower.

In this dark scene, we see broken family bonds, betrayal, disloyalty, and the darkness and corruption that has overtaken those who go to Magmel filled with greed. This greed becomes an obsession; one that people are willing to do anything for. 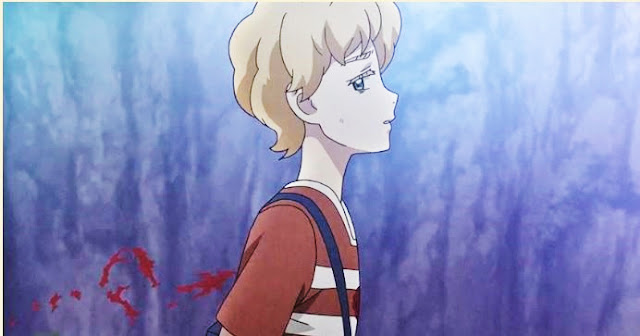 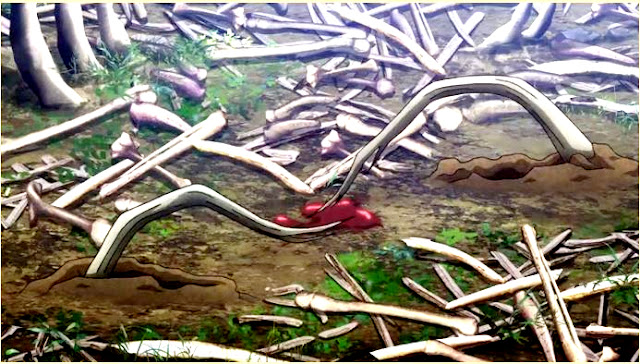 Kurikusu's blood feeds the flower and it blooms and his brother is able to obtain the Tear of Epona. Fortunately, Angler finds Kurikusu shortly after he is stabbed by his brother, and he has Zero deliver first aid to Kurikusu. However, first aid was not enough to save him, and even dying and in pain, Kurikusu is still loyal to his brother. He asks Angler to save his brother, despite that his brother is saying horribly cruel uncaring things to him, and thinks nothing of seeing him die. 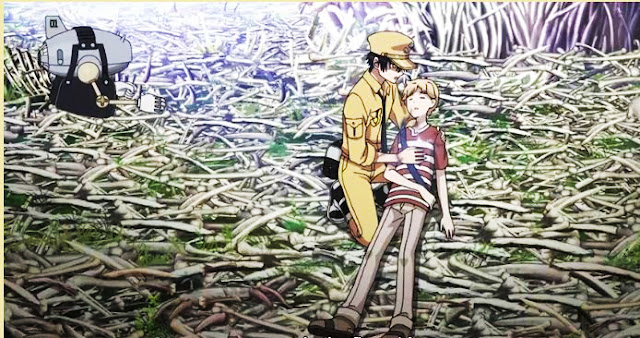 Seeing Kurikusu beg for his brother and continue to speak and think highly of him, even though he caused his death, is so touching and sad. Kurikusu's loyalty and love is so great and it really speaks highly of his character. You can't help but feel moved and fall in love with Kurikusu, and as sad as this scene is, it does end beautifully by showing Kurikusu being embraced by his parents in death. So although Kurikusu dies, he is happy to be with his loved ones again. 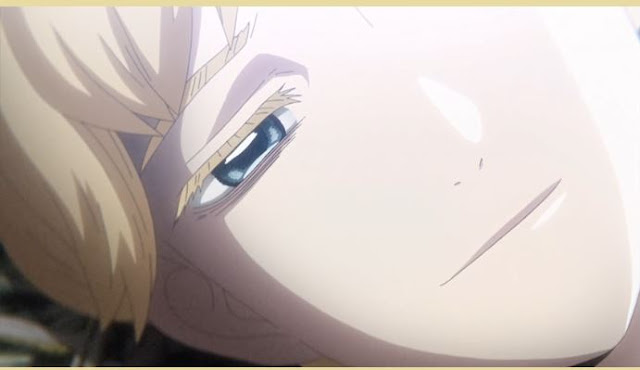 Though Angler promises to save Kurikusu's brother while he lay dying, the moment Kurikusu dies, Angler beats up his brother. It is also here that we see the true horrors of Magmel; the greed, hatred, and selfishness of the people's desires that makes them do unspeakable things. We see how easily people's humanity is tossed aside for their own greed and desire.

Magmel itself is not a bad place; it is the wealth that it offers people that changes them, and makes their hidden darkness emerge from inside of them. 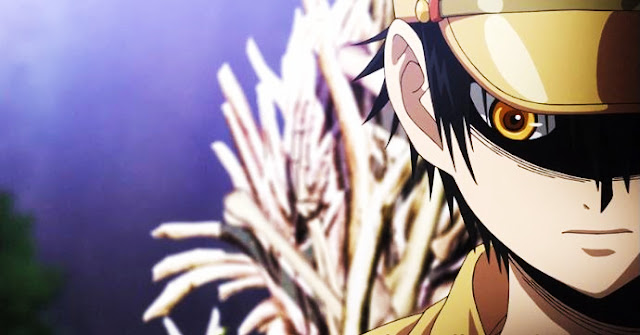 Immediately seeing how angry Angler got when Kurikusu died, I knew that he would kill his brother. Angler is strong though, so in order to fight Angler, Kurikusu's brother eats the Tear of Epona. This makes him change physically into a man that looks overly-hyped up on steroids. His body grows larger in size, his veins protrude profusely, and he grows a lot of muscle suddenly. The feeling of power that rushes through Kurikusu's body excites him and he attacks Angler, but his attacks still are no match for angler, so Angler kills him. Through death, Angler saves him; he saves him from the darkness within himself, and he prevents him from harming anyone else. 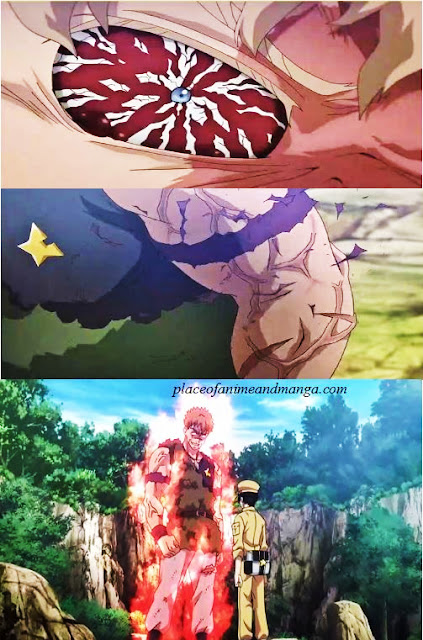 Gunjou no Magmel then ends this episode showing the grave that Angler built for Kurikusu and his brother. 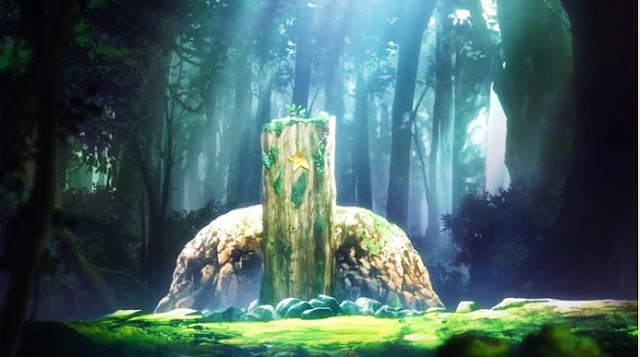 I did enjoy this anime, but I don't think it is for everyone. The graphics and design are excellent/high quality, and the plot/storyline and character development is very good as well. This anime does definitely have a darker storyline though, so if you are into more romantic easygoing animes, then you may not like this anime. However, I feel that if you like adventure, drama, action, and animes with some fighting thrown in, then you will enjoy this one. This anime doesn't move too fast or too slowly either, and since I feel that it is well-made, I do recommend this one. 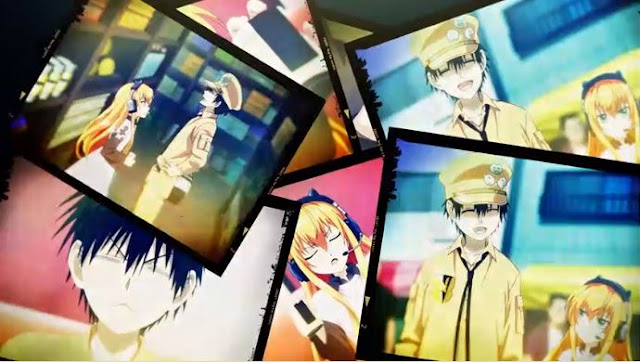