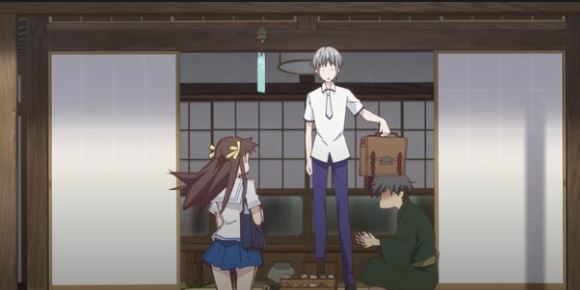 Tohru meets Shigure for the first time, and they start talking. Since Tohru and Shigure were both born in the year of the dog, Shigure tells Tohru that he feels closer and more connected to her, which Yuki overhears. Yuki assumes that Shigure is hitting on Tohru, who is much younger than him, so Yuki calls him out as a pervert. Yuki is quick to knock him out no questions asked! Bam 💫!

While Yuki and Shigure were walking in the woods towards their home after eating out until late one night, they happened to see Tohru walking by herself, so they followed her. When Shigure saw the tent that Tohru was living in, he went into a crazy fit of laughter! It took him several minutes to get that laughing fit under control 😄. I love Shigure's laugh. It sounds hilarious!

Tohru gets bullied by girls who love Yuki and who were upset and jealous that Tohru got to walk to school with him. Tohru's friends, Hana and Uo, come to her rescue. Hana throws out some creepy evil vibes to protect Tohru 👻. I love Hana. She can be so dark and creepy at times, but a very good protective friend.


When Tohru accidentally turns Kyo, Shigure, and Yuki into their animal forms when she trips on a piece of wood and bumps into Kyo, Tohru goes crazy and starts running around thinking she hurt Kyo and made him turn into an animal. Watching her freak out is hilarious. Tohru is normally so quiet and shy, but when she freaks out, she freaks out 😝!


Tohru answers the door all hysterical and looking crazy with all the animals (Shigure, Kyo, & Yuki) in her arms. She tells the mailman that they are animals and he just thinks she's crazy. Then when the mailman asks her to sign for the package, Shigure gets the family stamp and signs for it in his animal form. I think any normal person seeing this would freak out; at the very least, slowly walk away as a creepy chill goes up their spine 😇.

Since Tohru discovered the Souma family secret by accident, Shigure explains to her how their family works, why and how long they have been able to change into animals. During this explanation though, the boys suddenly change back into men! Unfortunately for poor innocent Tohru, they change back completely buck naked 💃! 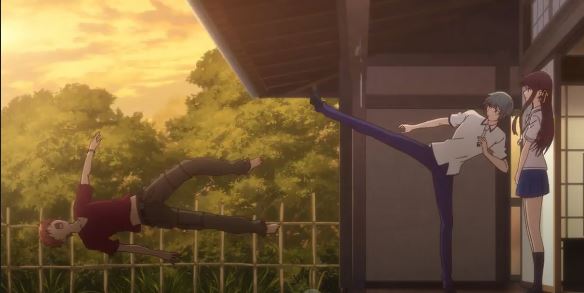 Kyo gets upset that there is a girl staying in the house and says something mean to Tohru. This causes Yuki to tell Kyo that he has no say in it since he is an outsider. This angers Kyo so much that he loses control of his temper, and he hits and breaks the table. When the table breaks, the force of the blow caused the table to spring back up at the ends and hit Tohru in the face, which causes her to have a face injury and bleeding. Yuki gets so made at this that he slaps Kyo in the face and beats him up. Kyo goes flying! Right into the pond just like a fish 🐟! Poor Kyo, but he totally deserved it and had it coming! Never hit a girl, especially a girl as sweet kind and innocent as Tohru 😔!

When Shigure tells Yuki and Tohru that he had Kyo transfer to the same school as them, Yuki gets upset because of his rocky relationship with Kyo. Yuki doesn't like Kyo and he barely tolerates him, so the thought of having to go to the same school as him is not appealing to Yuki at all 😱.


Kyo just started at his new school, and Uo and him go at it as Uo calls him out for being ignorant and pathetic. Uo totally trashes Kyo. Kyo being Kyo 😨, is unable to handle any negative comments, so of course, he loses it. This causes Uo and him to compete in the school game very fiercely and competitively. It is hilarious to see them go at it. They really do suit each other! Their personalities are so similar 👫! 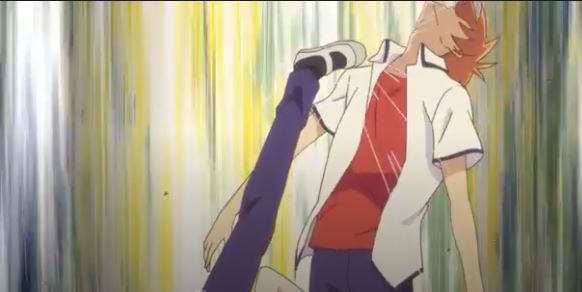 Kyo starts out complaining about his loss in the card ♠ game everyone was playing at school. He insists that he will win the game next time, and that he will definitely beat Yuki too. Yuki is condescending to Kyo, which causes Kyo to lose it again, and physically go after Yuki and fight with him. Of course, poor Kyo is still nowhere near good enough to beat Yuki...Tsk tsk, Kyo never learns 😔. 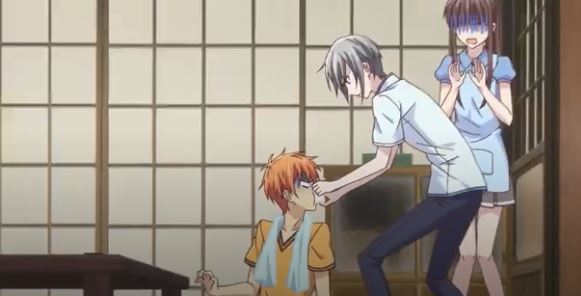 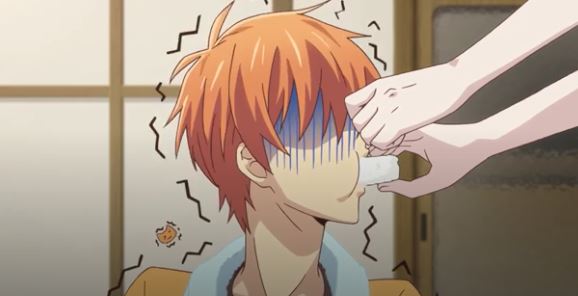 Tohru practices making rice balls for the school festival 🎊 that is coming up, so she makes different types of rice balls using fresh leeks from Yuki's garden 🌱. Kyo nearly chokes and throws up the leeks since he absolutely hates leeks 😣😤! When Yuki hears Kyo complain about the food Tohru made claiming that it is not edible, Yuki gets so mad that he tries to shove the food down Kyo's throat and choke him on it! Yuki can be so fierce sometimes! It is hilarious 😂!